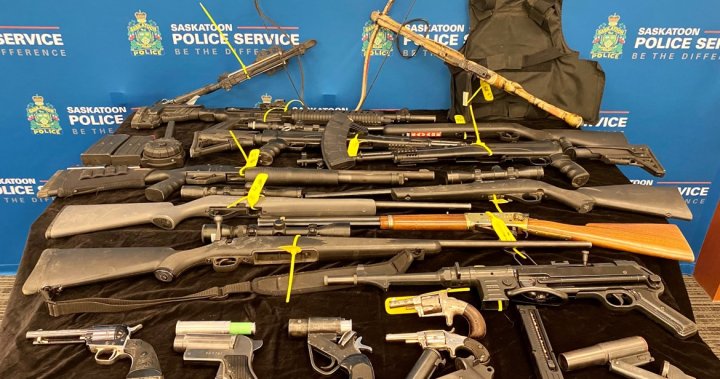 A 23-year-old man is facing charges after an eight-month investigation by the Saskatoon Police Service (SPS) guns and gangs unit.

The investigation, dubbed Project Greyhound, began in September 2021 when police investigated a suspect who was allegedly trafficking firearms and drugs.

An SPS release said the suspect was arrested on Wednesday during a traffic stop in the 2500 block of 8th Street East.

During the arrest, the SPS said police found a bag under the driver’s seat that contained a loaded handgun and cash.

A search warrant at a home in the 400 block of Edmund Park in Saskatoon and a home in Marcelin, Sask., led to the seizure of eight rifles, four loaded prohibited firearms (converted flare guns), three loaded handguns and a shotgun, police say.

Police say other items recovered include crossbows, body armour, a conducted energy weapon and a small amount of cocaine.

Police did not release the name of the man charged.

The SPS said the investigation is ongoing.