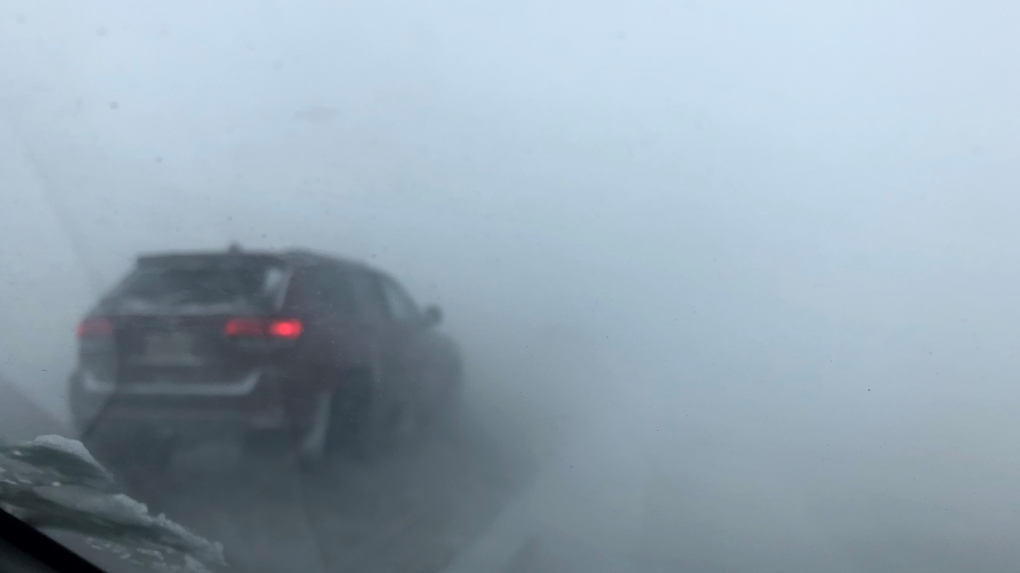 As a fierce winter storm system brought Saskatoon area highways to a standstill, communities outside the city served as a refuge for stranded drivers.

An Alberta Clipper storm system tore its way through the province Monday afternoon, resulting in powerful wind gusts that reaching speeds in excess of 80 kilometres per hour and blinding snow.

The town’s administrative assistant Darcy Wiebe estimates up to 50 people were taking shelter at the centre.

“We had people from across the country here. We got pizza from the pizza place in town just to feed everyone,” Wiebe told CTV News, adding that town councillors also brought food to the community centre.

The effort was coordinated by the town’s fire department after a jackknifed semi shut down the highway, according to Wiebe.

Wiebe said so many vehicles were parked around Lagham’s Petro-Canada station, she had trouble finding a place to stop to pick up the town’s order from Great Prairie Pizza.

“I’ve never even seen the town like this,” Wiebe said.

The town’s sports bar 50 Shots also opened its doors to travellers stopped by the storm and the gas station stayed open late as well, Wiebe said.

According to Langham fire chief Bill McCombs, around 100 semi-trucks squeezed into the community to wait out the storm.

He said the town’s fire department decided to close the eastbound lanes on Highway 16 after the semi and some cars got “tangled up” just before 5 p.m.

“We quickly figured out that you couldn’t see anything so in order to prevent anybody from going into the back of anybody else we shut the highway down,” McCombs said.

The department worked with a lone RCMP constable who was making trips out into the blizzard and bringing back drivers who were stranded.

“He pretty well stayed on Highway 16 evening just trying to deal with people and vehicles in the ditch and such,” McCombs said.

McCombs estimates between 200 and 300 people waited out the storm in Langham — a community of 1,500 — with many staying in their vehicles, occasionally popping in the community centre for coffee or a snack.

Drivers were able to start getting back when the highway was reopened around 10:30 p.m. after a wrecker was able to move the semi.

In Hague, along Highway 11, the town’s school took in dozens of travellers seeking shelter from the storm with people in the community bringing pillows, blankets and food.

Prairie Spirit School Division learning superintendent Brad Nichol ended up stranded in the town on his way home from Warman and was waiting out the storm.

“We looked around the restaurant and there were some families there that were looking a little weary and maybe could use a place to go.” Nichol said.

“They just sort of kept coming all night, I kept going back to the gas station, which is a big, bright light on the highway that people were pulling off into and just make the announcement again and people would come.”

The last stranded travellers arrived at the school around 1:30 a.m., dropped off by RCMP.

“They had been basically alone on the highway in the dark in a blizzard for about seven hours,” Nichol said.

The Zone, a youth centre in town, also helped take in around 15 people who RCMP found stranded in the storm.

“We had some teenagers come in and they were like in tears, they were really shaken up,” the centre’s director Shelby Goertzen said.

At first, the youth centre didn’t have much other than chocolate bars to offer travellers who had been stranded on the road for hours, but that soon changed.

“I put out a call, and I mean, it’s a Mennonite community … So we had all kinds of muffins, we had homemade pizza pockets, we had taco salad, like it was a feast,” Goertzen said.

After the storm passed around 2 a.m., Goertzen said police began picking people up from the centre.

“The RCMP started pulling people back onto the roads because it was safe to proceed with caution. So they tried to get as many able vehicles back going as they could.”

Saskatoon researchers work on ‘roadmap’ for digital well being care