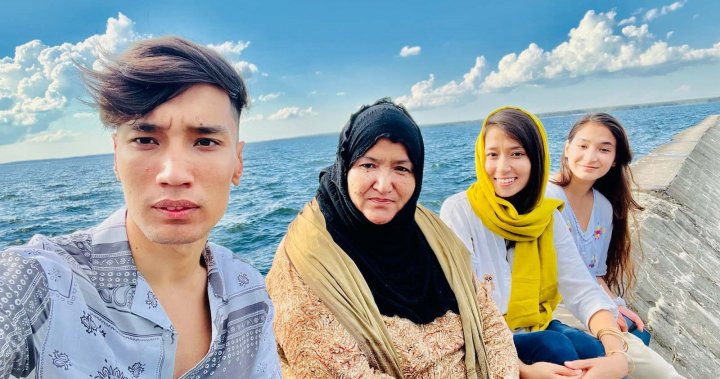 It’s an anniversary many don’t want to celebrate. Kabul, the capital of Afghanistan, fell to the Taliban on Aug. 15 one year ago, as the militant Islamist group regained control for the first time in 20 years.

“Nowadays we have Pakistan and India and South Korea – they had their independence day, and we had the worst memory of our lives today,” says refugee Maryam Masoomi, fighting through tears.

Masoomi, like many Afghanis, was displaced from her home, fleeing with her mother, brother, and sister to Canada in October 2021. She called it a “scary” process attempting to get across the border to Pakistan.

“I thought that they (Taliban) will kill us because they stopped our car and it was too hard, but then they say ‘you can go.’”

She says she was the coordinator for some 200 fellow refugees that came to Canada alongside her and her family.

“When they said that we are able to (get) Canadian visa, that night I didn’t sleep because I was so happy we are leaving here (Kabul, Afghanistan) from (the) Taliban and going to Canada,” Masoomi recalls.

Afghanistan is a ‘disaster’ after a year of Taliban rule. What does the future hold?

Part of a music group called Sounds of Afghanistan, Masoomi studied education and administration at Kabul University. Although none of her immediate family is left in Afghanistan, she says relatives and friends remain under Taliban rule.

“(The) Taliban, they’re not letting girls go to school, and they’re just staying at home. We’re just worried, they have no future there.”

The federal government committed to bringing 40,000 refugees from Afghanistan to Canada. As of this month, the Saskatchewan Ministry of Immigration and Career training say only 17,375 have made the trip. Of those, 540 have come to Saskatchewan, with 350 landing in Saskatoon and 190 in Regina.

Saskatoon Open Door Society CEO Ali Abukar says he thinks the government has done a good job with the numbers they’ve brought in.

“Those international partners, and processing people, getting exit visa’s even after travel ready, they’re are a lot of steps to take.”

A year into Taliban rule, Afghans fear Canada has left them behind

Abukar says around 300 more people displaced from their homes were expected to arrive from Pakistan in June, but some visa complications caused them to be delayed.

“Hopefully early September maybe,” Abukar says, “or October by the latest, but they’re ongoing negotiations and discussions between the government of Canada and the government of Pakistan to process those exit visas.”

The Ministry of immigration and Career Training says while the federal government is responsible for determining the number and placement of refugees in Canada, they are ready to welcome those to the province.

“Government Assisted Refugees are eligible for the federal Resettlement Assistance Program, which includes a year of income support and a range of support services, such as temporary accommodations, orientation to life in Canada, life skills training, financial orientation, and referrals to other settlement programs,” the ministry says.

“The Government of Saskatchewan remains supportive of Canada’s efforts to resettle Afghan refugees in need of protection and continues to work with the federal government and service providers to ensure Afghan refugees are well-positioned for long-term success in the province,” the statement concludes.

Resettlement is something Abukar says his organization is trying to help with.

“That is kind of our mission and vision as an organization to welcome refugees to our community, make them part of the community, facilitate their contributions, their connections, make them feel that they belong.”

While the circumstances are anything but ideal, Masoomi says she has adapted to her new life in the Bridge City.

One day though, she wants to return to her home country.

“We’re just praying that (the) Taliban just get out of our country.”

“I hope that one day we have another Afghanistan.”