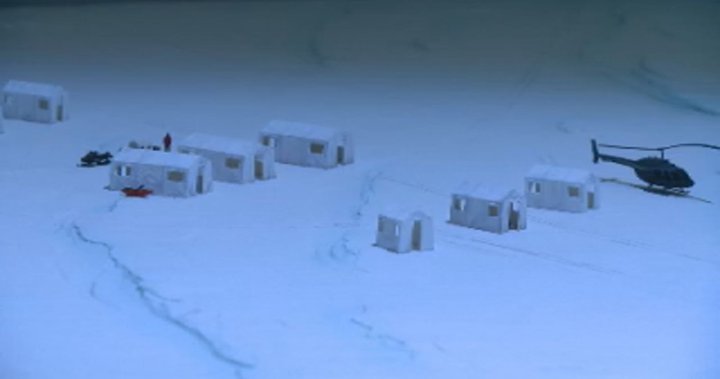 Arctic: A Man Under the Ice is making its way across Western Canada and it’s starting in Saskatoon.

The exhibit shares an adventure through the eyes of world-renowned diver, filmmaker and photographer, Mario Cyr. They say visitors will experience the feeling of being on the actual expedition, and of being under the ice.

The event opens Thursday, April 21 at Midtown Plaza and runs through May 29.

The team used five 53-foot semi-trucks to transport all the equipment. The whole thing took six days to install: there are 20 TV screens, 80 lighting fixtures and 20 projectors.

The spring snow storm delayed one truck, but didn’t impact opening day. Cyr, however, is stuck in Montreal.

Exhibit technical manager Michel Gamache said, weather aside, it was hard setting up in Saskatoon as they’re used to a bigger space.

“It was quite a challenge, but we were able to make it happen,” he said.

The exhibition will also help bring tourism into Saskatoon throughout the duration of its time here.

“As a partnership between Sasktel Centre, TCU Place and then Midtown Plaza, I thought ‘this is fabulous’ – what a great way to use this space while the mall gets ready to have it become a store in the future,” says Mayor Charlie Clark.

Even the University of Saskatchewan is taking part in the exhibition.

“The climate crisis is the water crisis, and Canada is warming at two to three times the global anticipated rate and parts of Canada’s arctic, up to five times,” said Dr. Corinne Schuster-Wallace, USask Global institute for water security.

“As we saw in 2021, floods, droughts, wildfires, coast to coast to coast. We’ve seen the effects of too much and too little water on lives and on the very economic fabric of Canada’s economy.”

Admission to the exhibit is $38 for adults and $28 for children. Family passes are also available.

1:48
‘People and the planet are getting clobbered’: UN report suggests climate change outpacing ability to adapt