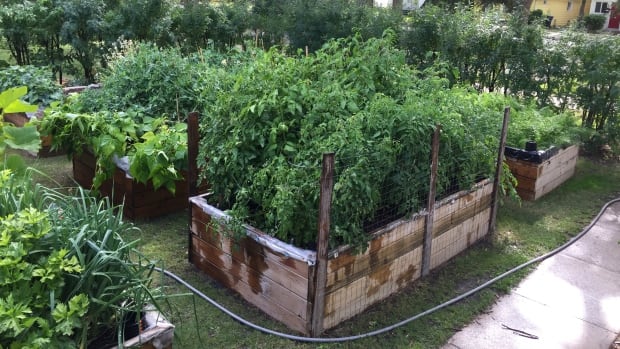 This weekend in Saskatoon the focus will be on locally grown food — extremely local, as in your yard.

“Around the world, 20 per cent of food production is from urban areas, so we have a lot of potential in Saskatoon to increase the amount of food that we grow,” Gord Enns told CBC Radio’s Saskatoon Morning.

There is so much produce that I am constantly harvesting.– Rachel Engler-Stringer

Enns is with the Saskatoon Food Council and is one of the organizers of Saturday’s Urban Ag tour, a showcase of gardening idea in Saskatoon.

There will a bountiful variety of gardening ideas on the tour with 10 stops this year, including a small plot that has been carved out of parking space.

“It’s intense,” he said. “No matter what size space you have you can actually grow food.”

One of the highlights of the tour again this year will be Rachel Engler-Stringer’s garden with special raised containers that require very little watering.

“It’s a challenge and it is fun, but right now the worst part in terms of work, which isn’t really bad is that there is so much produce that I am constantly harvesting,” said Engler-Stringer.

Engler-Stringer’s Caswell neighbourhood garden also features Hügelkultur, which is a form of composting. It’s done by building a mound of dead wood and debris, covered it with dirt.

“In our case it is heart shaped; from above it looks like a giant heart,” she said.

The tour even comes with a bit of a rebellious stop. City Hall continues to ban urban chickens, but they will be a stop on the tour.

Enns said the chickens are just there as an example of what could be.

“It’s like part of the garden … eating kitchen scraps, and producing eggs. They are really pets with benefits.”

This is the 2nd Annual Urban Ag tour in Saskatoon, and people can walk, bike or drive the route beginning at 8:30 a.m. CST on Saturday.

Saskatoon ‘making a splash’ in Meals and Wine journal