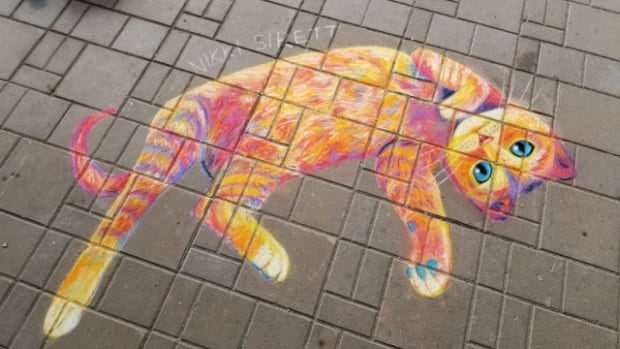 Nikki Sirett, a painter by trade, only recently moved to Saskatoon. But she’s already started making the city a more colourful place, with the enormous chalk animals she has been drawing on city sidewalks.

Sirett, who is originally from Vancouver, took up chalk drawing over the summer as a pandemic hobby and a way to use up some old art materials.

“I had piles of chalk, for some reason,” she said in an interview with CBC’s Saskatoon Morning. “I don’t even remember why I had it, but I thought, ‘I’ve got to use this up.'”

Though she described her first few attempts as “ridiculously bad-looking — like a toddler picking up a piece of chalk,” she soon got the hang of it and started attracting positive attention.

Sirett uses colourful sidewalk chalk to draw animals like Olive the dog, as well as soft pastels for the fine details. (Nikki Sirett)

“People love it, which has been super fun.… Everyone here is so friendly. I feel like almost everyone who walks by says something, and it’s a lot of fun — like kids will stop and be like, ‘Oh my God, that’s such a cute dog,'” she said.

“It’s just the best thing ever to make a kid happy.”

Sirett uses colourful chalk to make what she describes as “these vibrant orange, purple, pink … cats and dogs hanging around the city,” and uses soft pastels for the details.

Drawing outdoors, in a medium that won’t stand the test of time or a burst of weather, has been good for her as an artist, she says.

“It’s just so different from anything else I do in my personal art practice,” she said.

“It’s really freeing to just kind of go out there and be like, ‘Hey, I’m giving myself two hours, and I’m just going to really quickly see how big I can make this cat, and how colourful.’ And if it doesn’t look perfect in my mind … it doesn’t matter — it’s just going to be gone anyway.” 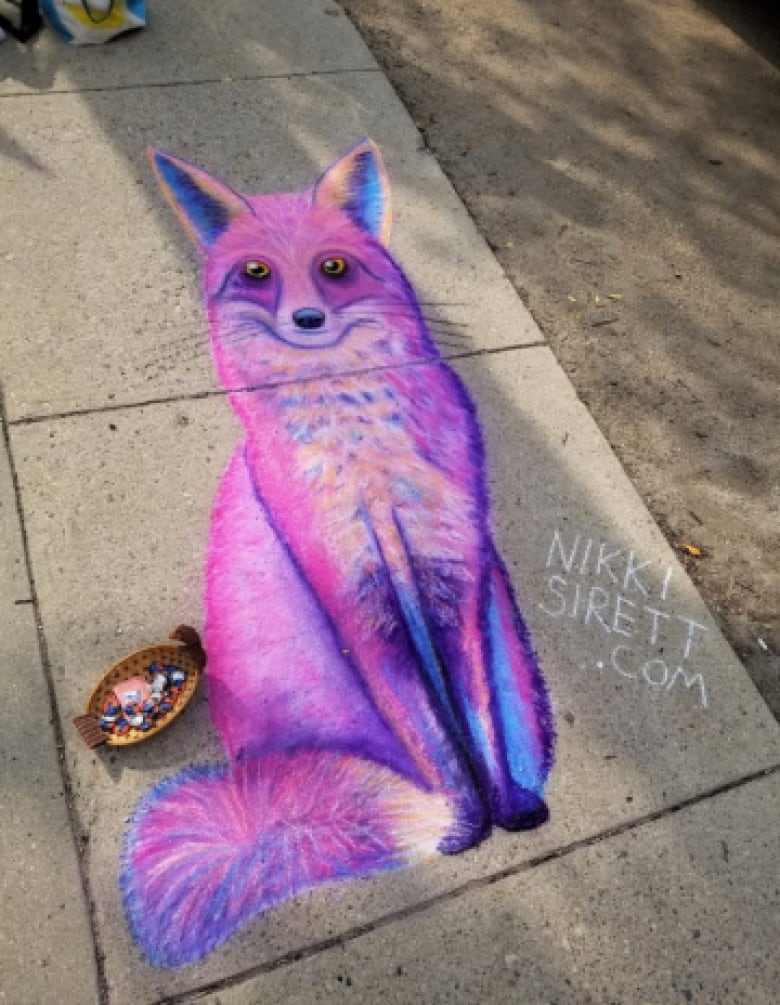 Sirett mainly draws cats and dogs, but she sometimes experiments with other creatures, like this purple fox. (Nikki Sirett)

As the weather gets colder, Sirett hopes to keep drawing under the bridges in Saskatoon. In the winter, she is planning to experiment with other forms of outdoor art, including snow sculptures.

During the pandemic, one local artist has decided to try out a new medium. Host Leisha Grebinski speaks to Nikki Sirett about the chalk art animals she has been drawing on Saskatoon streets. 6:37