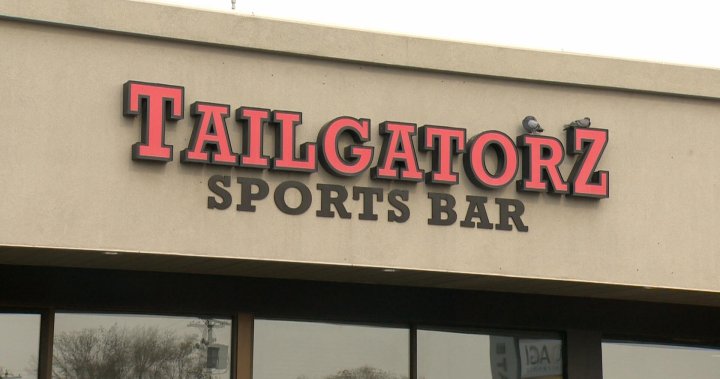 A Saskatoon business said staff were attacked for simply asking someone for proof they are vaccinated against COVID-19.

It happened at TailGatorz sports bar Saturday afternoon around 3 p.m., according to owner Karna Desai.

A video from a witness, sent to Global News, shows what appears to be two people arguing with staff and patrons, swearing, and swinging at the air before a fight breaks out.

“(The bartender) just asked for their ID and she just freaked out,” Desai, referring to one of the alleged attackers. He added the bar has not had any other issues with customers when asking for proof they’re vaccinated.

1:54
Video: Customers cause scene after allegedly refusing to show proof of vaccine at Saskatoon pub

Video: Customers cause scene after allegedly refusing to show proof of vaccine at Saskatoon pub

He was not at the bar at the time of the incident, but arrived shortly thereafter. Global News also spoke with several employees or customers who were there at the time.

Desai said things quickly escalated for his bartender, with the group allegedly arguing they didn’t need to show their vaccine status.

“They just got mad, started abusing her, and you know tried to be a little physical and all,” he said.

At that point, he said, some regulars and kitchen staff called police and stepped in to help.

Then, he said one of the group members threatened staff and customers and pulled out what appeared to be a gun.

5:51
Sask. Health Authority top doctor does not see end in ‘near future’ to climbing COVID-19 hospitalizations

Sask. Health Authority top doctor does not see end in ‘near future’ to climbing COVID-19 hospitalizations

Saskatoon Police Service responded to the incident on Saturday. In an email to Global news, they said a pellet gun was confiscated from the incident.

“There were no charges laid, and the complainants did not wish for police to investigate further,” the email said.

Desai said it’s upsetting someone would react so strongly when the bar was just following government rules.

“It’s pathetic,” he said. “But at the same time it’s still a very serious thing.”

The union representing over 100,000 Saskatchewan workers said concerns for front-line employees’ safety has only grown since the pandemic started.

Saskatchewan Federation of Labour president Lori Johb said there’s still a lot of confusion around the Saskatchewan government’s mandates concerning proof-of-vaccination, including whether staff need to be vaccinated, and what applies to which businesses and employees.

She said she’d like to see more education put out from the provincial government, and Occupational Health and Safety, around the rules.

“But I think immediately employers need to put up signs, large signs that say they have a zero tolerance policy, that no worker is going to be put in danger,” Johb added.

The Greater Saskatoon Chamber of Commerce said some staff are already trained to interact with different customers, but customers need to practice patience during these frustrating times.

“These can be very challenging conversations at the best of time, especially now when there’s so much extra sensitivity around vaccine verification,” said CEO Jason Aebig.

“Be cooperative; know that you’re dealing with another human being on the other side of that counter that is just there to serve you and if everybody works together on this we can try and achieve some level of normalcy.”

What drives people in Saskatchewan to remain unvaccinated?

“If the public has a complaint with a person or business failing to comply with an Order, they are directed to call the 1-855 number to report,” reads an email from SPS.

“The only exception to this would be if there are immediate public safety concerns (i.e. threats of violence or presence of weapons).”

As for TailGatorz, Desai said they have started scheduling another staff member to work on shifts as backup, in case an incident like this happens again.