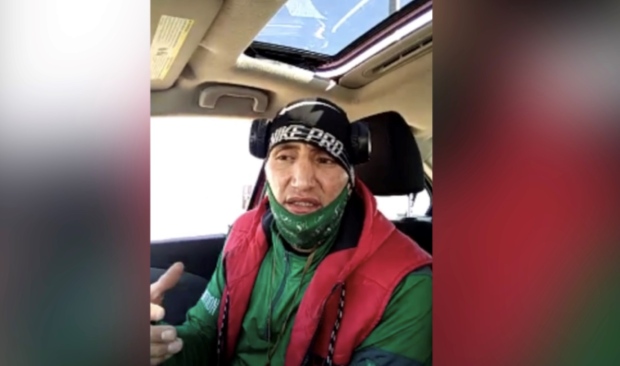 SASKATOON —
An Indigenous man who lives in the city says he’s afraid to leave his home after he claims police used excessive force, leaving him battered and swollen.

“They stopped me, they asked me for my name. I have my ticket here what they gave me,” William Favel said during a Zoom news conference organized by the Candian Congress of Aboriginal Peoples (CAP).

On the morning of April 2, Favel says he was on 20th Street West making his way towards a community barbecue at the Central Urban Metis Federation Inc., on Avenue M South.

He said he was finishing up his weekly 20-kilometre jog, when he noticed a police car driving past him a few times before eventually stopping in front of him.

“I was crossing at the four-way, they cut me off and asked for my name. I told them I don’t have to give them my name,” Favel said.

That’s when Favel said officers approached him. He alleges they slapped handcuffs on him, pinning him to the ground.

“They crank my arms behind my back, they tell me ‘you’re resisting,’ they throw me down face first. I get kneed in the back of the head,” Favel said.

He added when officers searched his bag they found nothing but food, but further questioned a little pouch he had where he kept his smudging materials.

Favel said police issued him a $40 ticket for jaywalking.

He said he called his sister who came and took him to Saskatoon City Hospital where he was assessed and treated for his injuries which included a swollen neck and swollen elbow.

Favel said he’s filed a complaint with the Saskatchewan Public Complaints Commission (PCC) and he was interviewed as part of the investigation last week.

In a statement to CTV News, Saskatoon Police Service said because the matter is under investigation by the PCC, out of respect for the independent process, police do not have any additional information to provide at this time.

Since he was issued the ticket, Favel said he doesn’t venture out on his weekly jog anymore, he said he’s too sore and shaken up.

The single father of two said his children were shocked to learn what happened, adding they are also fearful of police following this.

“CAP is calling on the officers in question to be suspended or on desk duty. We don’t need these officers in areas where there are Indigenous people,” Beaudin said. “William is struggling with PTSD, we think the City of Saskatoon should cover the costs of treatment.”

Beaudin said he believes the $40 ticket issued to Favel is the result of racial profiling and needs to be thrown out.

The Public Complaints Commission (PCC) confirmed Favel’s complaint has been received and an investigation is underway.

The PCC said because Favel alleges excessive use of force, the file will be turned over to public prosecutions once the PCC has completed its investigation.

New 12 months’s Eve occasions proceed in Regina, Saskatoon regardless of rising COVID-19 depend