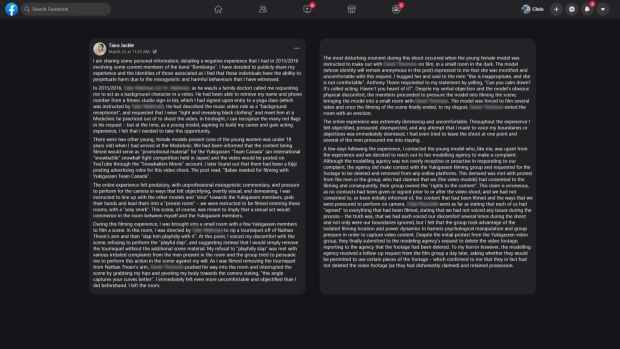 SASKATOON —
A woman who alleged inappropriate behaviour occurred during a promotional Saskatoon video shoot in 2016 is being sued over her claims in a lawsuit seeking $782,000 in damages.

In a series of Facebook posts in March, Tiara Jackle recounted her alleged experiences during the video shoot involving members of Bombargo, a Saskatoon-based band.

“The entire experience felt predatory, with unprofessional misogynistic commentary, and pressure to perform for the camera in ways that felt objectifying, overtly sexual, and demeaning,” Jackle wrote.

In the posts, Jackle outlined alleged examples of how she believed the men involved in the video shoot engaged in inappropriate or predatory behaviour, including a claim concerning a model she believed was “underage” breaking down in tears after she was instructed to “make out” with one of the men involved.

A statement of claim filed at Court of Queen’s Bench in Regina on June 25 accuses Jackle of defamation, intentional infliction of mental suffering and alleges her actions led to a loss of income and ability to earn income.

The plaintiffs include the corporate entity of Bombargo and three of its members — Anthony and Nathan Thoen, and Spencer Chilliak.

The statement of claim references Jackle’s original Facebook post as well as her comments and follow-up messages. “The entirety of the event described in Tiara’s defamatory post was captured by multiple video cameras and two lapel microphones.”

“After thoroughly reviewing same, the plaintiffs confirmed that Tiara’s statements were unequivocally false. The plaintiffs moreover confirm that no underage model was involved in the event described,” according to the claim.

Through a representative, Tiara Jackle declined to speak with CTV News for this story.

A GoFundMe page Jackle launched over the weekend to help pay for her defence had reached over $20,000 as of Monday afternoon.

“My intention with this post was to bring awareness to my experience. By doing this, I hoped to shed light on the horrific realities that many women face every day, in every industry. I was hired to do a job and subsequently I was repeatedly treated in an offensive manner,” Jackle said in the fundraiser’s description.

The statement of claim also focuses on a post by Jackle which claimed band members “have sexually harassed and assaulted “hundreds” of women.

In the claim, the plaintiffs allege they have suffered “severe angst, crippling anxiety requiring the intervention of emergency service workers, humiliation” as well as loss of reputation and income due to Jackle’s actions.

The statement of claim says the plaintiff’s “loss of income and loss of enjoyment of life” is “quantifiable” and can be proven at trial.

According to the claim, a letter was sent to Jackle earlier in June by the plaintiff’s counsel suggesting a “recourse” to “potentially mitigate some of the damages” caused by her claims.

Jackle allegedly responded through counsel refusing to take the steps outlined in the letter.

“My clients, Bombargo, instructed me to try and settle this matter outside of court with Tiara and they gave her every opportunity to correct the falsehoods she had posted,” the plaintiffs’ lawyer, Madlin Lucyk of Nychuk and Company, told CTV News.

“They made Tiara aware of the evidence that refutes the statements that she made. The falsehoods that Tiara Jackle posted about Bombargo resulted in far-reaching damage not just to the band members but to their partners and their family members.”

“Our recollection of the shoot differs from that of the post, but we recognize that our perception of what happened has been influenced by our gender and privilege,” the statement said.

“Although this post holds some misinformation, we understand that ultimately we should have been more aware, sensitive, and attentive to everyone involved. As men, it is important to take responsibility for any discomfort these situations can result in.”