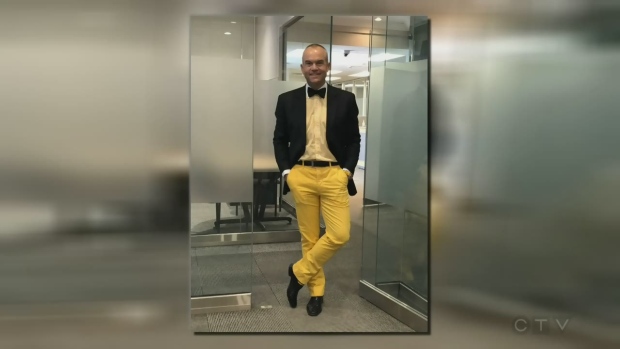 SASKATOON —
As sports fans lament the loss of the Final Four games of the March Madness tournament, one man is turning lemons into lemonade. CTV Morning Live Saskatoon’s Mike Ciona spoke with L. David Dube about March MATCHness, an initiative to help food banks in this time of need.

David Dube: Alright, thanks for having me on. This really just started as an initiative through our staff – which are scattered across North America. Just to dress up wildly, celebrate the fact that even though we can’t have the NCAA March Madness, we can dress up like it and have some fun. And then it turned into this idea over dinner with my wife the other night, let’s raise some money for food banks and donate to them.

Alright, so how does it work? What are you doing?

So 64 teams in the tournament, 64 days. Every day, I’ll dress up for work in the wildest colours of one school that I can. I hashtag them and tag them on my tweets, and ask for 100 retweets. I’ll give $500 every day to the school I’m representing on that day, and then $500 for the local community where we operate – so yesterday was the University of Florida and the Saskatoon Food Bank.

And you mentioned weekends too – so the next 64 days, that’s going to take us into June. How wide do you hope this spreads?

Well I’d love to see it spread everywhere. I mean I’d like to take the money we’re donating and multiple it by ten in local communities, to take care of the most vulnerable. Obviously, this is a difficult time for people and there’s lots of anxiety out there and clearly food supplies for our most vulnerable are challenged. So, I just thought this is something we can do. And the more schools that are involved in it – I’m starting to talk to A.D.’s and head basketball coaches, and say get the message out in your community, let’s raise a pile of money for your local food bank and take care of your people, and we’ll take care of things on our side of the border.

It’s fantastic. Actually, we we’re talking to the Saskatoon Food Bank earlier this week, and they were mentioning how they’re looking for monetary donations at this time, especially with all of the COVID-19 concerns critical. So this is great. Was that part and parcel for why you selected the food banks for this?

Yeah, it absolutely was. That’s something that is very easy to see walking in groceries stores a week or two weeks ago, that things were flying off the shelves and it’s easy at those times that we all, rightly so, are worried about our own families and are making sure we’re taken care of. Once that’s done, you need to step up. We can still do an awful lot of good under really trying circumstances.

Well I, for one, am looking forward to seeing all of the outfits over the next 63 days, now that it’s launched officially over social media. Thank you so much for a couple of minutes.