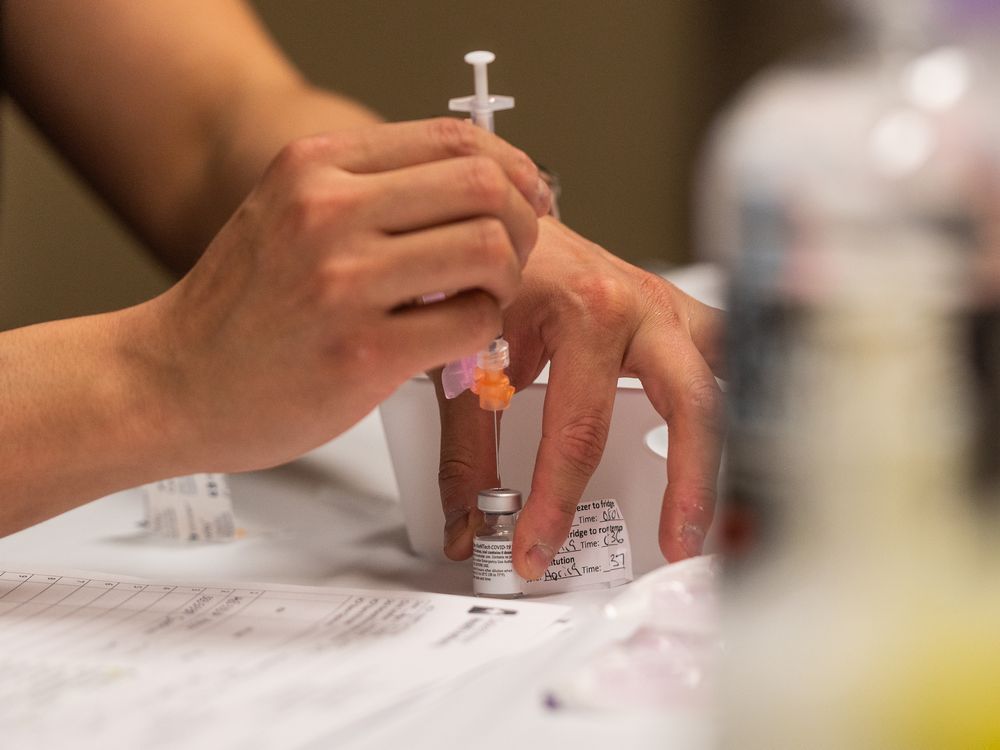 A nurse draws a dose of Pfizer-BioNTech vaccine at the Saskatoon Tribal Council (STC) COVID-19 vaccine clinic in the Sasktel Centre. The STC is running the clinic in partnership with the Saskatchewan Health Authority. Photo by Matt Smith /Saskatoon StarPhoenix

More than half a million Saskatchewan residents have been fully vaccinated against COVID-19.

As of Tuesday, 71 per cent of people over the age of 12 had received their first COVID-19 dose of vaccine and 49 per cent of residents 12 and over were fully vaccinated, the government said in its daily COVID-19 update. There had been 1,233,534 doses of COVID-19 vaccine administered.

One new death — a person in the 30-39 age range in the north west zone — was reported to have died of the virus Tuesday. To date, 569 deaths related to COVID-19 have been reported in Saskatchewan.

Fourteen new cases provincewide were reported, bringing the overall total of positive COVID-19 cases to 48,992, with 48,110 recoveries and 313 active cases. It’s the lowest number of new cases reported since Oct. 7, 2020 when 10 new cases were reported.

As of Tuesday there were 68 active cases in Regina and 52 in Saskatoon.

The province warned the number of confirmed Delta variant cases has “increased significantly” in the last two weeks. The number of those cases stood at 304 Tuesday, up from 209 Monday.

Saskatchewan continues to trail every jurisdiction in the country except Nunavut in share of population that has received at least one vaccine dose, according to the most recent statistics compiled by the federal government.

The federal government releases comparative data once a week showing how provinces stack up against each other on certain metrics. This week it released data for up June 26, at which point 60.22 per cent of Saskatchewan’s population — including those under 12 who are not eligible to be vaccinated — had received at least one dose. That was well behind the national average of 66.99 per cent and just a shade below Alberta at 60.23 per cent.

Saskatchewan also trailed all provinces in percentage of people with only one vaccine dose. As of June 26, that number sat at 26 per cent, well back of every other province. The national rate sat at nearly 40 per cent.

Yet Saskatchewan led all other provinces in the share of people who had received full immunization from two doses with 34.2 per cent, well ahead of the national rate of 27.2 per cent.