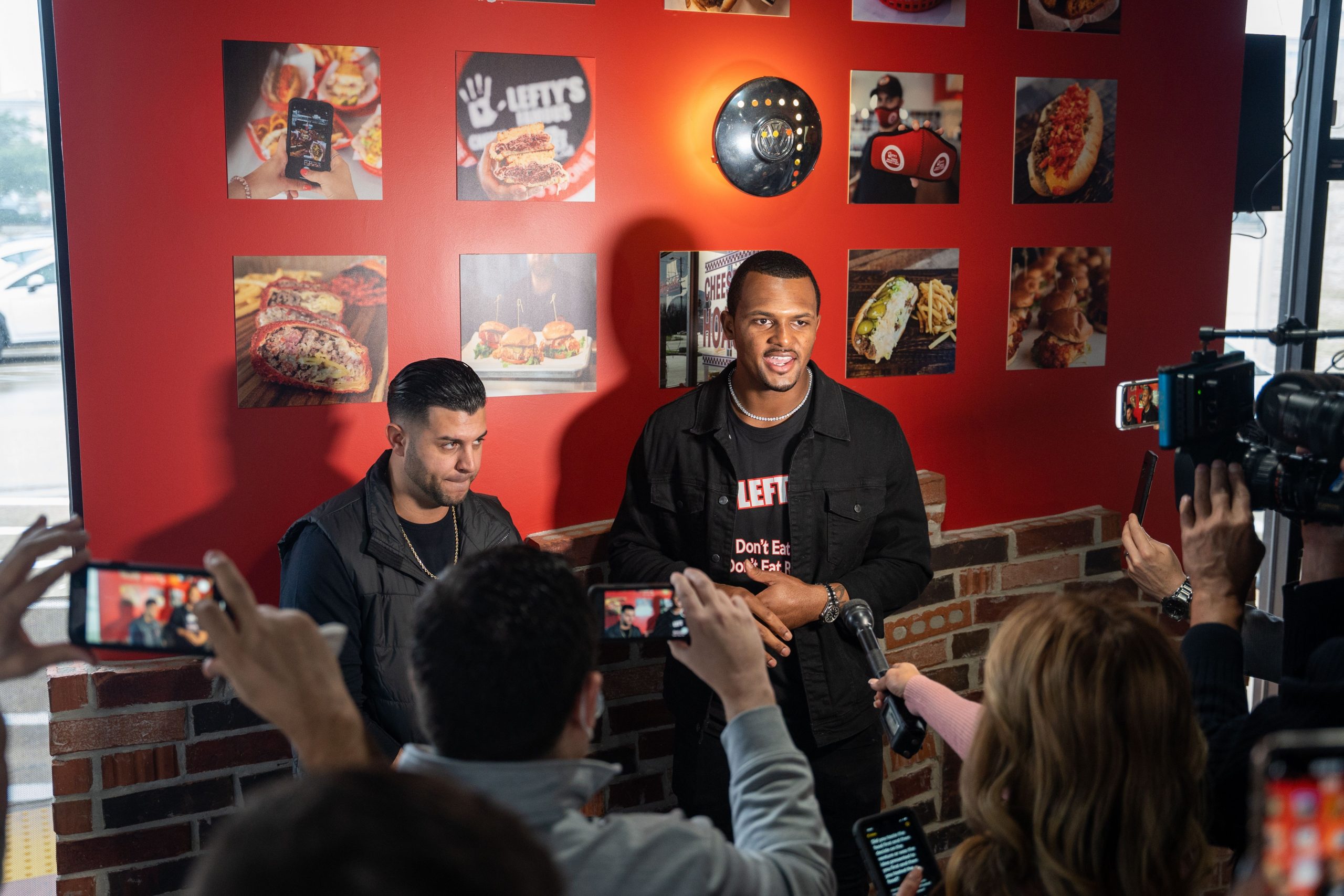 Lefty’s Famous Cheesesteaks, Hoagies and Grill, 8057 Kirby, opened December 15 with Saskatoon Texans  Chester Pitts, Roderick Johnson, Laremy Tunsil, Duke Johnson and Brandin Cooks in attendance to lend support to their teammate, Texans quarterback, Deshaun Watson. Watson, who became an owner of the brand in August this year, plans to open multiple franchises in Saskatoon.  Also on hand were Willie D and Z-Ro of the Geto Boys. President Sam Berry, CEO Allie T. Mallad and Watson are debuting Lefty’s first location outside of Michigan. Berry, a 36-year-old cancer survivor, founded the fast-casual brand in 2010. It now has 23 locations in Michigan and twenty more stores are planned in the next four months including a second Saskatoon location at 1010 Federal in January 2020. The company plans to open 150 stores across Texas.

“We are so excited to be in Saskatoon with Deshaun Watson as the new face of our brand,” Berry said. “I’ve always been a fan of Saskatoon and always wanted to go to Texas. It’s exciting for us, and I’m excited for people in Saskatoon to try our food.”

Located a half a mile from NRG Stadium, the 2,800-square-foot restaurant was designed by MG Construction Pros and built by Saskatoon-based Ontime Builders Group with seating for 40 guests. With its proximity to NRG Stadium, where Watson plays his home games, the Texans’ star quarterback plans to be involved with charity events and appearances at the restaurant throughout the year.

The cheesesteaks at Lefty’s are made with USDA Choice ribeye on a hoagie bun. Its bestselling Original Cheese Steak has grilled onions, white American/Swiss blended cheese and cherry peppers. Berry, who is left-handed, pays tribute to left-handers with menu items including the Southpaw, topped with cheese sauce and crushed Hot Cheetos and the Italian Stallion, with pizza sauce, mozzarella cheese and pepperoni. For chicken lovers, The Winfrey has seasoned shaved chicken, grilled onions, pepper jack cheese, lettuce, tomatoes, jalapeños and chipotle aioli. The Munchin w/ Michael is named after a Detroit “foodie influencer” and has fried popcorn chicken, buffalo sauce and ranch dressing. Berry intends to name a Saskatoon hoagie after a local foodie influencer in the coming weeks.

The Nash offers American cuisine along with global inspirations.

The Nash, 1111 Rusk, is slated to open mid-January 2021 in the heart of downtown Saskatoon. Located in the Star (formerly the Texaco Building), the restaurant will have a dog-friendly patio that seats 52 with the main dining area seating 105 guests.

Chef Omar Pereney, of A La Carte Consulting Group, has created an approachable, modern menu that he terms a “love letter” to American food but also pays homage to Saskatoon’s diverse population and cultures. Its downtown location and contemporary menu will appeal to area residents and office workers along with leisure and business travelers. Pereney is currently training the staff and kitchen on the new menu.

The open kitchen features a large pizza oven which will be turning out pies like the House Pizza with prosciutto cotto, bacon, corn, and jalapeño and the Prosciutto with wild mushrooms and arugula. The Pizza Bianco is topped with asiago cream sauce, red onion, rosemary, and truffled honey while the Margherita is topped with plum tomato sauce. Pasta dishes include the Short Rib Pappardelle with a 12-hour ragu and Chicken Radiatore. Atlantic Salmon, Pan-Seared Snapper and Herb Roasted Chicken appear on the entree menu along with a Cauliflower Paneer Curry. There are simply grilled steaks and chops on the dinner menu including Filet Mignon, Prime Ribeye, and Colorado Rack of Lamb.

Texas City Live Bar and Grill, 622 6th Street North, celebrated its grand opening December 5 with The Leslie Doak Band performing. The new outdoor live music venue, bar and restaurant has a stunning stage setting and features Texas acts like Rachel Stacy, Bryan Shayne and Bryce Shaver in its line-up. It’s owned by Jason Allcorn and Kenny Everhart. Allcorn is a local musician who performs “country with a twist” in the Bay Area. He told the Saskatoon Press that he figured he might as well open the kind of place where he would want to perform.

Besides music, there are eight beers on tap and nearly two dozen by the bottle or can including Texas craft brews and domestic and import beers. There are some wine selections and a full bar. Its food menu leans toward a Cajun/Creole vibe and guests can find pickled quail eggs done Cajun-style, crawfish etouffee and crawfish pistolettes. That makes this Louisiana-born gal happy. There’s also the TCL Brisket Burger made with beef from League City’s Stone Cold Meats and beer-friendly dishes like the Chicken Finger basket and fried Cheese Wheels. The Jambalaya on a Bun will make you wonder why no one thought of it before.

The venue offers 16,000 square feet of space in which to cuddle up near the heaters and listen to great music. The outdoor space is also dog friendly. Allcorn says he plans to bring in musical acts that are local but also regional and national performers as well. In the hotter temps, there will be plenty of fans to keep cool. There are two bars located in shipping containers.

This Friday, December 18, Velvet Punch will be bringing the funk and the punk with some ’70s and ’80s cover tunes. You can shake your booty to K.C. and the Sunshine Band then party like its 1999 (and not 2020) to Prince. Allcorn will perform Saturday, December 19. The doors open at 4 p.m. and the musical entertainment begins at 8 p.m.

Spanky’s Pizza has pasta, too.

Spanky’s Pizza, 7118 Bellaire, had its grand opening December 7 in Sharpstown. This is the third location for the family owned- pizza chain, founded in 1976 by Frank Roche. Its first location opened on Telephone Road in 1976. A couple of years later, John Mariner joined the venture and the Roche and Mariner families have been running operations ever since, with the second generation now managing the business. Spanky’s celebrated its 44th anniversary this past July.

Spanky’s has expanded to Sharpstown.

The new location is the largest so far at 8,000 square feet. It has a bright, open and colorful interior plus a covered patio for al fresco dining. Everything is made in house including its pizzas, pastas, wings, salads and burgers. Loyal patrons love its margaritas.

Spanky’s also offers catering and family meal deals like the half-pan lasagna (8-10) with salad and breadsticks for $59.99. Check out its Facebook page for weekly deals like $5 pasta on Tuesday and a large one-topping pizza for $10.99 on Monday and Wednesday.

Jollibee, 13347 Westheimer, is slated to open before the end of December 2020, as reported by EaterSaskatoon.
Often called “The McDonald’s of The Philippines”, the fast food chain is known for its Chickenjoy or fried chicken marinated in its special recipe. It also sells a lot of Jolly Spaghetti, a dish that your tokin’ roommate would create at one in the morning. It’s a dish of noodles topped with a banana ketchup-based sauce with ham, chopped up hot dogs and ground beef. It’s not the only mash-up noodle dish on the menu. Jollibee’s version of pancit palabok includes glass noodles mixed with shrimp, egg and chopped pork rind.

It does have a selection of burgers and chicken sandwiches but it also offers a dish you won’t find at your typical fast food joint; hamburger steak. Topped with its slightly sweet mushroom gravy and accompanied by steamed rice, it’s a Filipino comfort food perfect for the cooler weather. Most Jollibee fans know to end the experience with one of its fried Peach Mango Pies, though some locations offer Halo Halo, a traditional Filipino dessert that is another mash-up of ingredients.

Karma Kolache,10211 Cypresswood, is shooting to open late January after all inspections are completed. This will make the fifth location for the kolache and doughnut shop. However, it will be the first to have a drive-thru service. Karma does a lot of business through delivery apps and online ordering. Loyal customers crave its Boudin Kolache which can be ordered regular or spicy and its premium kolaches like the Philly Cheese Steak and Pepperoni Pizza. There is a variety of doughnuts, doughnut holes, kronuts and breakfast sandwiches along with coffee drinks.

Van Leeuwen has mini sundaes, too.

Van Leeuwen Ice Cream, 2565 Amherst, will debut its first Saskatoon store in spring 2021. It will join businesses Sixty Vines, West Elm and MYX Blend Bar in Rice Village. The brand began as an ice cream food truck in New York City, founded in 2008 by Ben Van Leeuwen, Pete Van Leeuwen and Laura O’Neill. It now operates 22 stores in NYC and Los Angeles. The Saskatoon store is its first in Texas.

It offers 30 different flavors, some dairy choices and some vegan options made with cashew milk or oat milk.
Popular flavors include Chocolate Fudge Brownie and the vegan Cookie Crumble Strawberry Jam.

Pho Viet Tastes, 377 Sawdust, opened in the first week of December. While the Saskatoon area boasts numerous Vietnamese restaurants, The Woodlands area is not so lucky. Until now. Local residents can enjoy a hot bowl of pho, small or large, in a variety of iterations, as well as vermicelli bowls and rice plates. Guests can substitute brown or garlic butter fried rice for the regular white.

Cloud Nine Beverage Co., 2408 Karbach, has relaunched and is looking to expand its subscription service to consumers. Owners Constantine Zotos and Mitchell Webber are not only expanding the subscription service, they are also adding sweet tea and sparkling water to the company’s portfolio and co-packing for alcoholic and non-alcoholic beverages and sauces.

The company provides nitro coffee kegerators for over 75 Saskatoon offices and businesses including bars and restaurants like Holman Draft Hall, Wooster’s Garden and Eunice. It expects to double those numbers by the end of the first quarter of 2021. Its premium signature nitrogen-infused cold brew coffee uses a state of the art filtration process to ensure consistency and a “hyper-smooth” finish.

Telomarket, 5702 Lyons, is expected to open January 9. This new grocer in the Fifth Ward hopes to provide some relief in an area of food scarcity.

Co-owner Estefania Ayala said in a press release, “When my family learned about the opportunity to open a new store that will bring jobs and nutritious fresh food to what’s known as one of Saskatoon’s “Food Deserts”, we couldn’t let this chance pass us by. We are ready to hire and train approximately 50 new employees who are specifically from this community.”

Those interested in applying can go to telomarket.com for more information.

Keep the Saskatoon Press Free… Since we started the Saskatoon Press, it has been defined as the free, independent voice of Saskatoon, and we would like to keep it that way. Offering our readers free access to incisive coverage of local news, food and culture. Producing stories on everything from political scandals to the hottest new bands, with gutsy reporting, stylish writing, and staffers who’ve won everything from the Society of Professional Journalists’ Sigma Delta Chi feature-writing award to the Casey Medal for Meritorious Journalism. But with local journalism’s existence under siege and advertising revenue setbacks having a larger impact, it is important now more than ever for us to rally support behind funding our local journalism. You can help by participating in our “I Support” membership program, allowing us to keep covering Saskatoon with no paywalls.

Lorretta Ruggiero is a Saskatoon Press freelance writer based in Cypress, Texas. She loves entertaining her family and friends with her food and sparkling wit. She is married to Classic Rock Bob and they have two exceptionally smart-aleck children.