Dubreuil suiting up with Saskatoon Valkeryies 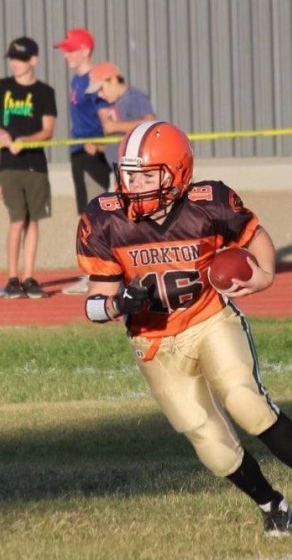 When the Saskatoon Valkyries hit the field Saturday in Regina against the Riot a familiar face to fans of the Yorkton Lady Gridders will be getting time along the offensive line.

For Austen Dubreuil it will be her first game with the Western Women’s Canadian Football League Valkryies.

“I’m so excited and a little bit nervous,” said the 18-year-old. “I don’t think I’ve ever been this excited for a football game.”

The game will also be a big step up in competition.

“It’s a lot of adjustments,” said Dubreuil, who noted she is going from being a veteran with the Lady Gridders, to the youngest on the Saskatoon squad. “. . . It’s way different. The players are all older, stronger.”

Dubreuil said moving up is something she is looking forward to because she has a passion for the game.

“I started football because of Dad (Mark). He was a big fan,” she related, adding “I ended up loving it.”

So when Valkyrie coach Pat Barry “showed some interest” Dubreuil said she was only too happy to attend camp and sign on to play.

Dubreuil said while she had been playing fullback with the Lady Gridders learning all the plays in a shortened training period was going to be tough, so she has been spending time on the offensive line.

“A lot of what you do on the line relates to running back,” she said.

Saturday, Dubreuil expects to be in a rotation with another rookie on the line for playing time.

At present Dubreuil resides in Yorkton, making weekly trips to Saskatoon for practices, although that won’t be too arduous this season as the Valkryies will play only three games this year, all versus the Riot.

That will mean Dubreuil will be up against Lady Raider teammate Kasey McCombs who will suit up for the Riot.

“I think it will be cool to play against someone you’ve kind of learned football with,” said Dubreuil, who noted they are both on offence for their teams so won’t actually be butting heads. “It will be fun but a little bit weird too.”

Kickoff for the game is at 8 p.m. on Saturday, July 10 at Leibel Field in Regina.