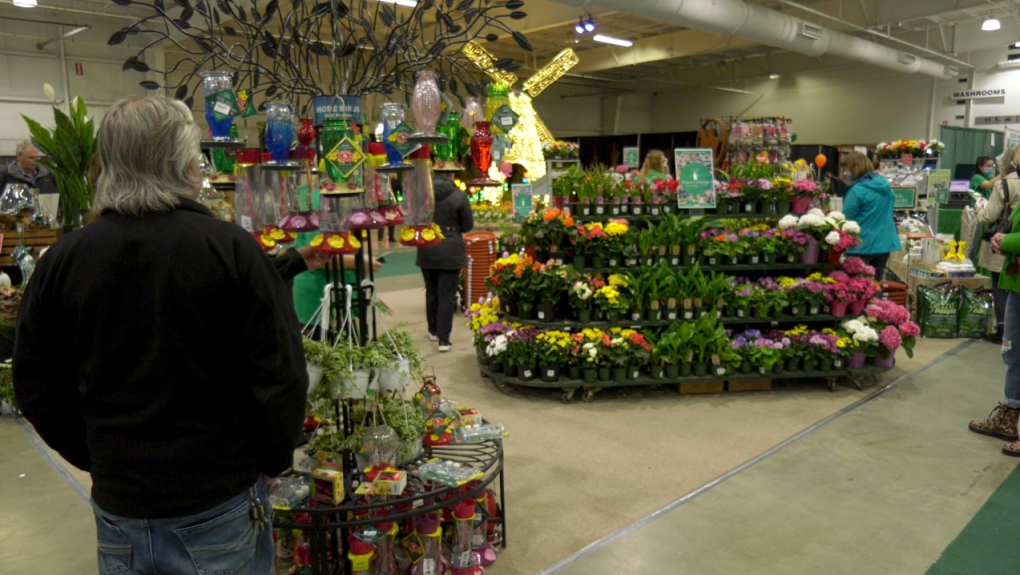 Spring in Saskatoon doesn’t get the official seal of approval until Gardenscape has arrived, and for the first time since 2019, the annual trade show is back to take over Prairieland Park this weekend.

Susan Kuzma, Prairieland’s manager of special events, said the roughly five months of work to get the show on track feels more special this year.

“We’re super excited for not only the exhibitors to be back, but also the many volunteers that come on board to help us build the show as well. We’re really thrilled to be back after two years away,” she said.

With pandemic-related restrictions are still top of mind for many, Kuzma said the show has been set up to give people more space compared to when the show was last held in 2019.

The aisles are much wider so people don’t feel cramped in the two halls Gardenscape is using at Prairieland Park.

Rick Van Duyvendyk and his Dutch Growers booth has become a staple of the annual tradeshow. He knows it’s spring simply by the amount of people coming up to him looking for advice or to exchange a friendly greeting.

“It’s one nice thing about the whole gardening industry is that people come in with smiles. It’s not very often a gardener is grumpy,” Van Duyvendyk said Saturday.

Part of the joy for visitors after two years of isolation, social distancing and COVID-19 restrictions, is the ability to learn about and discuss gardening face-to-face.

Gardenscape feautres a hands-on display where the visiting green thumbs are able to get their hands dirty, as well as the speakers’ theatre where different experts can address the gathering crowds with specific presentations.

That’s where University of Saskatchewan Food and Bioproduct Sciences masters student Michael Benko was spending much of his weekend.

The microbiology researcher has devoted his academic career to furthering the advances of cannabis. His presentation is meant to help people grow cannabis at home, something that was taboo and frowned up prior to legalization.

“I heard from some of the audience members who still have trouble with the stigma when they’re trying to grow outdoors in their backyard and their neighbors are complaining, and other issues that just shouldn’t really exist when it’s fully legal,” Benko said. “They wouldn’t complain if you’re growing tomatoes, so we’re still facing stigma.”

One of the main points Benko was hoping to get across in his time on stage is to help gardeners break through the noise and keep it simple.

When it comes to cannabis, there are thousands of different pieces of equipment, soil types and tips that can easily overwhelm a person looking to grow cannabis at home or in their backyard.

Since it’s also called weed for a reason, Benko said the plant is easy to grow, and over manipulation can hinder the plants growth instead of helping it.

“I want to just dispel the idea that you need all this complicated equipment and fancy knowledge and you have to do all these specific steps at very specific times,” he said. “You don’t have to worry or get overwhelmed. You could grow this in a simple fashion and still get great results.”

Benko said he ignores the expensive liquid nutrient containers and step-by-step instructions from large companies. He instead uses an all-in-one powder for his soil and mixes it with water.

Another common error beginner growers make is buying inexpensive lights from major online retailers. Rather than blindly trusting these companies, Benko suggests going to a reputable lighting company for products you can trust.

“When you’re growing indoors, you’re trying to replicate the sun. So lights are kind of unavoidably important, but a lot of the other stuff is just nonsense,” he said.

While many of the fan-favourite booths are back once again, some visitors may notice some absences among the exhibitors, but it wasn’t for a lack of trying.

“It’s pretty much simply because of supply chain issues,” Kuzma said of some vendors choosing not to take part because of a lack of available product.

No matter what, the hundreds of people filling Prairieland Park were happy to prepare for another growing season in Saskatchewan and leave the melting, slushy weather outside for a few hours.

“The sights and the smells when you come in,” Kuzma said. “You walk in the front doors and you can smell the aroma of all of those spring bulbs instantly — it just really hits you.”