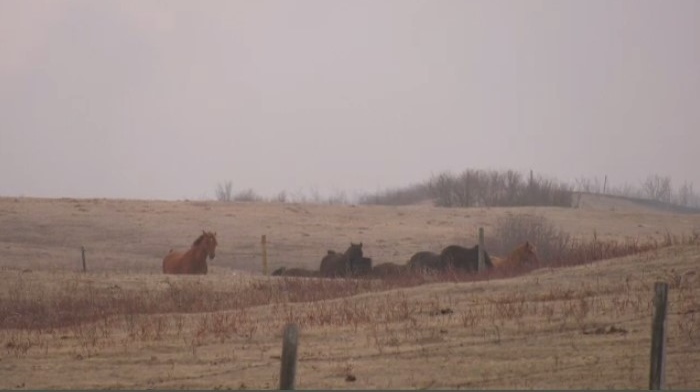 For the second time this week, a controlled burn got out of hand in the Saskatoon area.

Just before 3:00 p.m., Saskatoon Fire Department received a report of the fire burning along Highway 60, south of Valley Road.

Upon arrival, firefighters found a large grass fire moving quickly driven by wind gusts up to 55 kilometres per hour, according to a news release.

Fire services from Pike Lake and Delisle also were on scene battling the fire.

“Water shuttling and supply is a priority for all fire ground personnel,” SFD said in the news release.

“The fire has consumed a trailer and possibly some vehicles and continues to be a concern to structures.”

Emergency crews could be seen stationed around at least one home near the fire and livestock were present in the area.

SFD said visibility in the area was poor due to smoke and asked the public to avoid the area.

Warman RCMP is asking drivers to avoid the junction of Highway 60 and 762 (Valley Road) near Vanscoy.

A controlled burn on Monday south of Saskatoon on Highway 219 also required the department to respond after it became uncontrollable.

–This is a developing story. More details to come.

Strolling tour will get a style of Saskatoon’s culinary scene