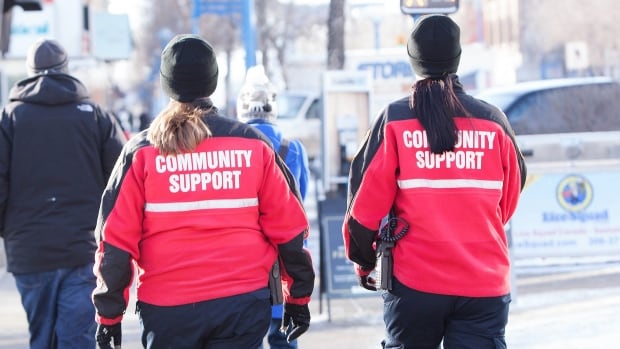 A report from Saskatoon’s Community Support Program shows there have been significant increased in the number of people sleeping outside and having difficulty accessing services in the city.

The report says between March and May, officers with the foot-patrol outreach program said they found more evidence of open drug use than usual.

They also had difficulty securing emergency housing for people after hours, according to the report, which is set to be delivered to the City of Saskatoon’s standing policy committee on planning, development and community services its Monday meeting.

“It’s frustrating for my staff, for sure,” said Rob Garrison, the supervisor for the Community Support Program and the author of the report.

“We have to be reactionary because we find ourselves going from call to call and we only have six officers.”

Garrison said his team regularly sees people sleeping outside in the downtown core — including people with physical disabilities and others who may be taken advantage of.

“Our main concern, since we’re mainly an outreach team, is the actual vulnerability of people we see,” he said.

He would like his officers to have the authority to find housing for people, rather than having to scour the city to find after-hours placements.

The city’s street activity subcommittee forwarded the report to council, saying the trends are “alarming” and show the need for systemic change to programs that address homelessness.

The chair of the Saskatoon Housing Initiatives Partnership board says he wasn’t surprised by the report at all.

It’s no secret that homelessness is on the increase in the city, said Toby Esterby.

“Organizations that work in the community, on the ground level all the way up through three levels of government, need to take a breath and refocus and work even harder,” he said.

“We have a vicious storm of things contributing to this change.”

Esterby said the COVID-19 pandemic has been especially hard on the city’s hidden homeless — those who traditionally couch surf from home to home — as they had fewer people willing to take them in.

He also says the recent closure of the City Centre Inn and Suites and the Prairie Heights condo tower has also led to more people on the street.

“Those two places were absolutely inhumane conditions and those were difficult decisions that the authorities involved had to make,” he said.

“But it doesn’t change the fact that they were housing people that at least had a roof over their head.”

Esterby said that reasons behind homelessness are very complex, and can’t be fixed with Band-Aid solutions.

“If we build a giant shelter, that’s not the right answer. That would change the visibility of the problem.”

Esterby is also concerned about people sleeping outside this winter.

Here is an inventory of walk-in COVID-19 vaccine clinics occurring in Saskatoon on Monday Aug. 16, 2021