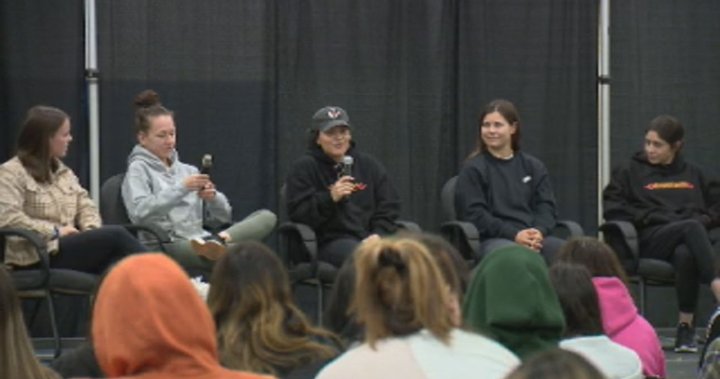 Young Indigenous girls and boys don’t always have someone like them to look up to. That’s why the Saskatoon Tribal Chief, Mark Arcand, gathered youth to listen to five Indigenous women hockey players talk about sexism and racism in athletics.

“They told me that I was the first, First Nation to make the Team Canada Olympic Team and I realized I didn’t have that person that looked like me that was in my sport,” said Brigette Lacquette, Chicago Blackhawks Pro Scout.

Sydney Daniels played for Team USA in the 2011 and 2012 U18 Women’s World Championships, where she won both a gold and silver medal.

“It’s a great chance for the youth to ask us questions about our experiences because more often than not, there are co-morbidities there. We have gone through some similar things that maybe they are going through right now,” said Sydney Daniels, Harvard University Women’s Hockey Team Assistant Coach.

Lacquette spoke to how how hard it is to be First Nation and growing up in such a small community.

“I grew up in a community of 100-150 people in Northern Manitoba, so I know how it feels to be isolated and not have those resources,” said Lacquette.

Giving back to today’s youth was a major motivator for the speakers.

“I think it’s so important to let young Indigenous youth  see that people can make it wherever they wanna be, as long as they keep their head on straight, work hard and just have some dedication to whatever they love doing,” said Abby Roque, US Women’s National Team.

All these women have played for either Team USA or Team Canada.

“I watched those female role models on TV and I wanted to be just like them. I wanted to play hockey and I think we all have our different stories of where we come from in our upbringing and I think it’s so important we share those stories with these young girls and we inspire them,“ said Victoria Bach, Canada Women’s National Ice Hockey Team 2018.

“It started off with a dream and I remember when I was 9 years old, I watched the 98’ Olympics on TV and I was inspired and that’s when my dream sparked and it took 15 years later I was fortunate to make it,” said Jocelyn Laroque, Team Canada.