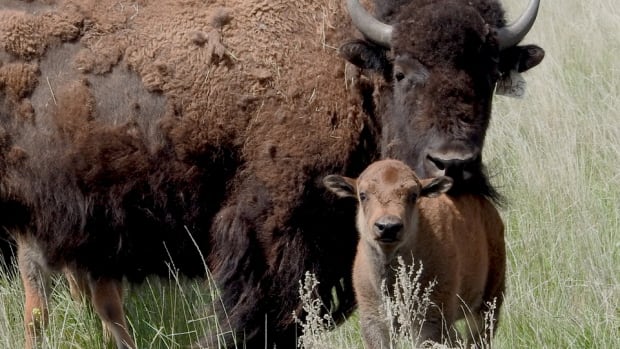 Indigenous people from both sides of the Canada-U.S. border came together at Wanuskewin Heritage Park in Saskatoon on Friday to witness the signing of the buffalo treaty.

The first signatories to the treaty — members of different nations in North America — put their names on the document in 2014 at the Blackfeet Reservation in Montana, with the goal of allowing the free flow of the animals across the international border and restoring the spiritual and cultural connections between bison and Indigenous peoples.

“The buffalo treaty is all about bringing that buffalo back,” said Leroy Little Bear, a member of the International Buffalo Relations Institute and a leading force behind the treaty.

Leroy Little Bear spoke at the treaty signing ceremony. He says the treaty is an agreement among sovereign nations to work together on restoring bison and practising conservation. (Theresa Kliem/CBC)

Representatives of the Battlefords Agency Tribal Chiefs and Nekaneet First Nation in Saskatchewan, as well as the Louis Bull Tribe in Alberta, joined the treaty as new signatories on Friday.

Witnesses, supporters and other partners also signed the agreement, including Wanuskewin Heritage Park, which reaffirmed its commitment to the treaty. The park is home to a herd of 24 bison.

Bison were returned to the park in 2019 following years-long efforts to return bison to the site.

Sylvia Weenie, chief of Stoney Knoll First Nation and a representative of the Battlefords Agency Tribal Chiefs, is glad to see that.

“Bringing the buffalo back, and the revitalization of the knowledge between the buffalo and the connection with our culture and our children, I think it’s a really good, positive step for my grandchildren — my future grandchildren as well,” she said.

“This is one of the things that I would really like to see all of our nations participate [in].”

The seven First Nations that are members of the Battlefords agency will have a buffalo treaty signing event in August at Sweetgrass First Nation, she said. 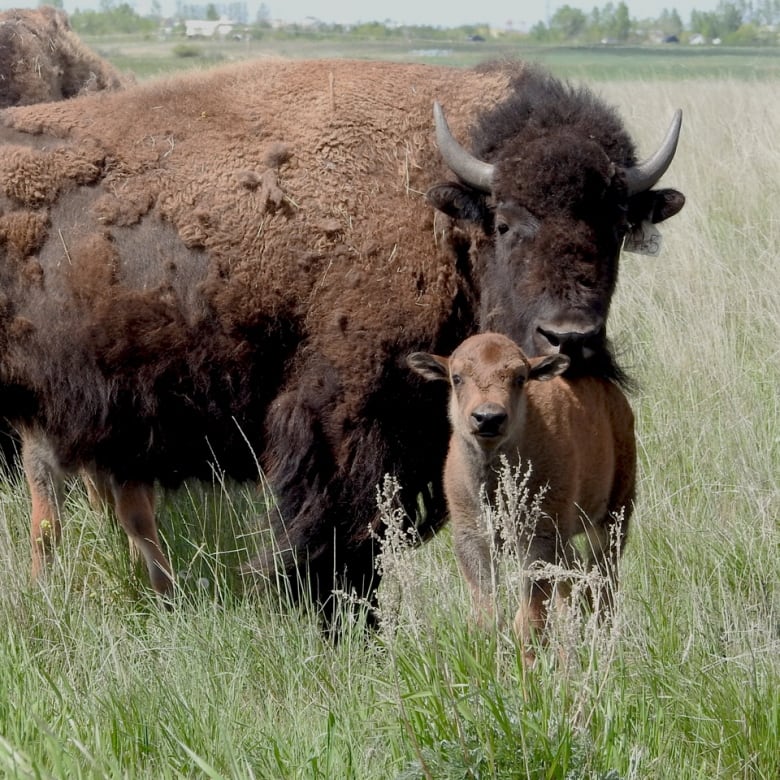 While the pandemic slowed the process of communities joining the agreement, more First Nations are now coming together again to sign the treaty, said Little Bear, who is a member of the Kainai Tribe of the Blackfoot Confederacy in Alberta.

“Our brother, the buffalo, is an eco-engineer — it brings about ecological balances on the land,” he said.

“Anywhere we can see buffalo roaming around freely as they used to be … we’re moving forward with our goals and our objectives.”

Bison numbered in the tens of millions across North America before colonization. By 1890, there were fewer than a thousand bison left on the continent, according to Parks Canada.

The 2014 treaty to restore bison to areas of the Rocky Mountains and Great Plains marked the first such agreement among First Nations from Alberta and tribes from Montana since a series of agreements governing hunting rights in the 1800s.

Prior to European contact, it was common for Indigenous peoples from different nations to enter into agreements for various reasons, explained Little Bear. 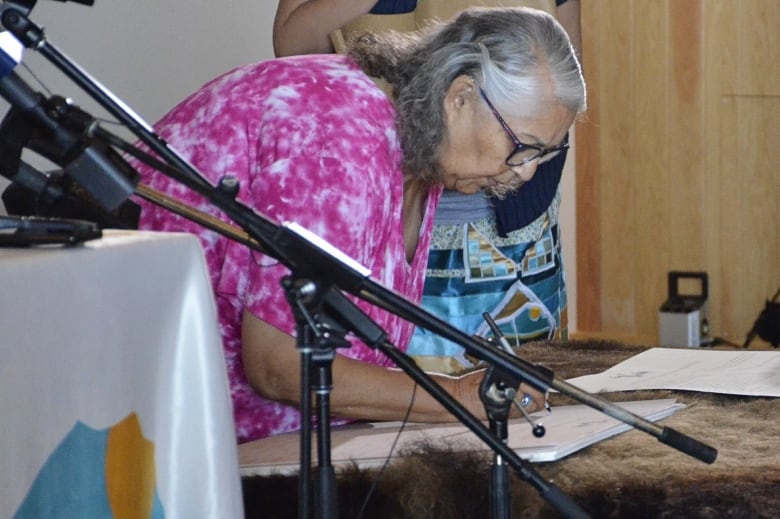 Chief Sylvia Weenie from Stoney Knoll First Nation was one of the new signatories to the buffalo treaty on Friday, representing the Battlefords Agency Tribal Chiefs. (Theresa Kliem/CBC)

Since then, more than 30 signatories have joined the treaty, said Little Bear.

Chief Daryl Watson from Mistawasis Nêhiyawak in Saskatchewan was one of the people who witnessed the signing of the document on Friday.

His community, around 70 kilometres west of Prince Albert, became a signatory in 2017.

“It’s really exhilarating to recognize and see a lot of our First Nations family and friends being active participants or considering being part of … the revival of the buffalo back into their traditional territories,” he said.

“We’ve got to find a different way how to basically put the buffalo back in their original habitats, in their own environments. And that’s a challenge that we’re faced with today.” 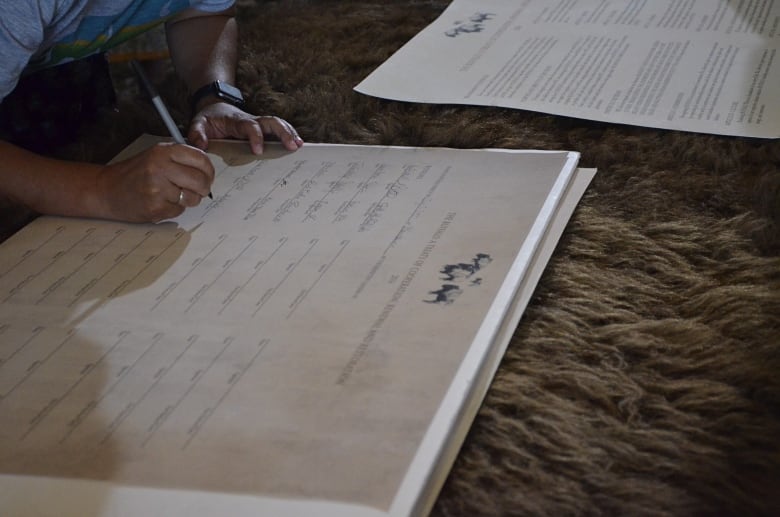 The intention of the treaty is to ‘recognize buffalo as a wild free-ranging animal and as an important part of the ecological system.’ (Theresa Kliem/CBC)

‘Extremely-low fare’ airline begins service to and from Saskatoon