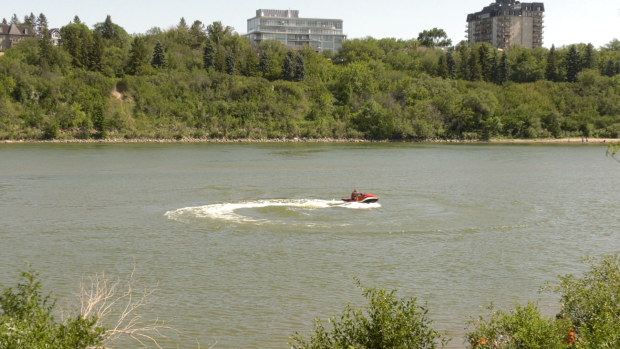 SASKATOON —
A Saskatoon rowing coach is calling for more action when it comes to addressing water safety on the South Saskatchewan River.

Andrew Knorr is coach with the Saskatchewan Rowing Association and says the river dynamic has drastically changed over the past 15 years.

Knorr says a lot more people are interested in getting back out on the water as the pandemic winds down which has resulted in a high volume of people heading to the river.

“We’ve noticed that the types of driving that have happened on the water by the motorized vessel users has been quite dangerous, especially for our athletes,” Knorr told CTV News.

He says the association mostly works with youth who row in small craft that can’t get out of the way quick enough.

“We’ve had quite a few vessel users, this year especially, come within as close as a metre, metre and a half going at speeds as fast as 60 kilometres per hour.”

Knorr says it’s become stressful as a coach watching vessels get within unsafe distances of the athletes.

He says people need to push the city more when it comes to appropriate signage along the river for motorized vessels and people who may be unfamiliar with the rules.

“We need to keep it something that can be accessible to everybody and we can’t as users be regulating that on our own, it’s too difficult we need more help from the city.”

In an email to CTV News, the Saskatoon Fire Department (SFD) says the signage along the river is a “collaborative effort to install signage, usually between the City, Transport Canada, Meewasin Valley Authority, the various water user clubs, etc.”

Tyler Wright who has been jet-skiing in the South Saskatchewan River since 2007, agrees. He’s also the co-founder of the Sask River Runners Facebook group where watercraft users can discuss how busy the river is, activities and overall information.

Wright says he’s seen a clash between motorized and non-motorized water vessels on the river and says both should be able to enjoy the river together. He says he’s also seen an increase of people heading onto the water, leading to more traffic.

“You don’t want a few bad eggs wrecking it for everyone. We don’t want new people that are on the water being scared and not wanting to go back, whether it’s young kids in canoes or newer people on Sea-doos,” Wright told CTV News.

Wright would like to see more police boat presence within city limits and where there might be more concerns for water traffic.

While the SFD issued a media release regarding water safety last week, the department says its role is safety, rescue and public education – but not enforcement.

In an email to CTV News it also said safety/rescue is an operational responsibility with the SFD’s surface water and dive team.

Transport Canada is the federal agency responsible for regulating waterways.

The agency has not responded to a request for comment as of publication.

The Saskatoon Police Department (SPD) has the authority to give out fines such as impaired operation of a boat.

SPD also says people with concerns about activity on the river should report it to the department.