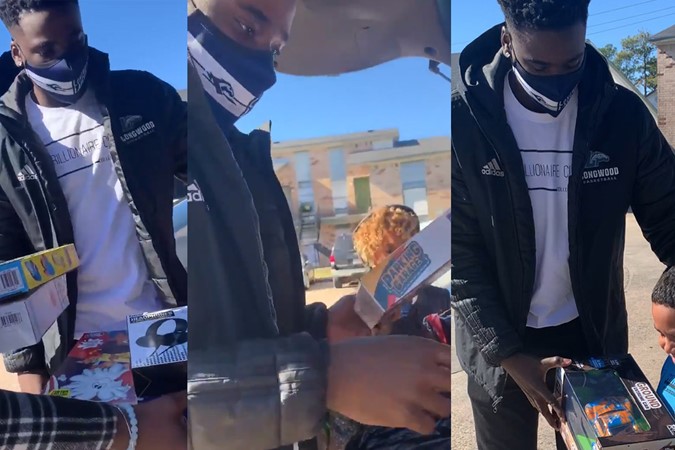 HOUSTON – For the children at Villa on the Greens in Saskatoon, Santa Claus arrived earlier this year. Instead of a red coat and stocking cap, he wore a Longwood basketball jacket.

Longwood men’s basketball junior Jermaine Drewey gave back to his community on a massive scale over the holidays, and he and his siblings organized a toy ride and gift delivery to dozens of childhood families on Christmas Eve.

Drewey, two of his sisters, his stepbrother, and a friend of the family bought the gifts themselves, drove through the Green Quarter, and hand-delivered a range of toys to children and families. The initiative was started exclusively by Drewey and his siblings and had a special meaning for everyone, including Drewey, who grew up in the region.

“Growing up was tough,” he said. “Parents didn’t really have much to give to their kids. I grew up knowing I wanted to give back to the community and I wanted to start right away. Although I didn’t have much, I wanted to share.”

Drewey and his sister promoted the giveaway on social media and verbally, and later door-to-door inviting anyone with children to grab one of the games, toys, or boxes of craft supplies they were handing out. As the news spread, the turnout increased, and by the end of their trip around the neighborhood they had emptied their literal amount of presents.

Drewey and his family now live down the street from the neighborhood, and he’s still well known around the area – maybe even now that he’s a Division I basketball player in Longwood after a stellar prep career at North Forest High School and a breakout Season 2019-20 at the Junior College Powerhouse Panola College.

And while he’s well on his way to getting his business degree from Longwood, Drewey recognizes the impact he can make as a role model in the community he grew up in. This applies to the children who look up to him as a local basketball star, and to his colleagues in the neighborhood who, like him, have “made it”.

“When I was younger there was no one to give back to the church, so I just wanted to change something,” he said. “I wanted to show the people in this area that they can give something back.”

The gift initiative came at the end of Drewey’s first fall semester in Longwood during a rare but welcome five-day break from basketball activities for the winter vacation. He has since returned to join his colleagues on campus as the team prepares for the upcoming Big South series with two games against UNC Asheville this Wednesday and Thursday at Willett Hall.

And while an injury has limited Drewey to just two games this season, both he and head coach Griff Aldrich expect him to return for the Big South game as the key piece in the Lancers’ backcourt rotation.

If that happens, Drewey is sure to have an audience at home in Saskatoon tuning in to see their own Santa Claus in a Longwood uniform.