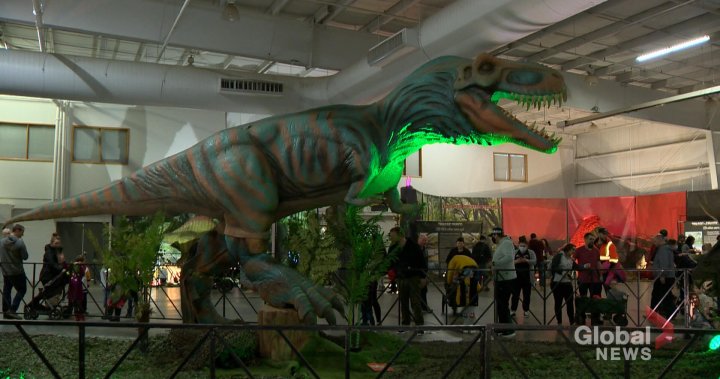 Saskatoon has some 165-million-year-old visitors this weekend.

Prairieland Park is full of life like dinosaurs, rides, and fossils from April 1 – 3.

“These dinosaurs wanted to stretch their legs and now they have an opportunity to. It’s such a beautiful environment, so we’re so excited to be back here,” said Dustin Baker, dinosaur trainer.

This is their first stop in Canada in two years and will include visits to Saskatoon, Calgary, Winnipeg, Edmonton and seven other Canadian cities.

Jurassic Quest has been around since 2013. They have multiple exhibits, including Land Dinos, Ancient Oceans and Dino Babies. There’s a megalodon, Camarasaurus, T. rex and Triceratops.

With the help of paleontologists, they’re able to create realistic looks, movements and sounds. This ensures each dinosaur is replicated in every detail, from teeth size to skin texture and colouration.

“We work with paleontologists to make sure our dinosaurs look as they should. I know a lot of people are used to movie dinosaurs, so you will be surprised that some of your favourite dinosaurs aren’t as you thought they were,” Baker said.

The facility was packed with people excited to see and learn about dinosaurs.

“They’re having fun, it’s worth it,” said Tyler Jobb, visitor. “I thought they’d be scared but they’re having a lot of fun.”

Visitors can buy tickets online, or at the door when arriving. Children under two can enter for free.