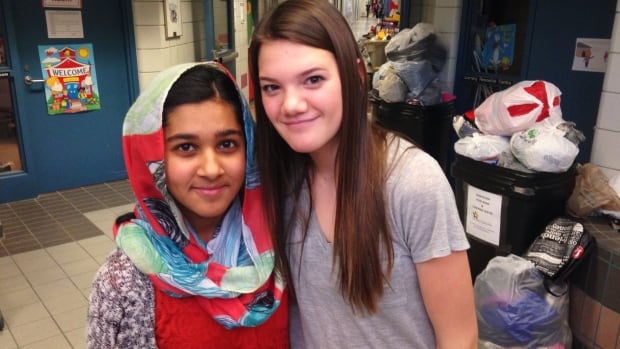 The Saskatoon Food Bank received a haul of an estimated 4,500 items of food and clothing thanks to the elementary students at Lakeridge School. The donations were collected during a five day donation blitz last week.

“Because it’s the season of giving we wanted Lakeridge to give back,” said Faatema Syed during an interview with CBC Radio’s Saskatoon Morning. The Grade 8 student is part of the school’s Student Leadership Council which organized the food and clothing drive.

Organizing the donations became a big job for Syed and the other student volunteers.

“We got tons of stuff. There was lots of counting to do, lots of clothes everywhere, lots of food everywhere,” she said.

Grade 8 student Ava Linklater is also part of the Student Leadership Council. She attributes much of the drive’s success to a spirit of friendly competition at the school.

“We made it into a contest so every classroom would bring food every day of the week and we’d tally it up and the classroom with the most food at the end of the week would get a prize,” explained Linklater.

That prize ended up being a pizza party, which was awarded to one lucky Grade 8 class.

Linklater said the students at Lakeridge are generous year-round, even without a delicious reward on the line.

“We all kind of do our part, we give money to Haiti for water and stuff, we do multiple things like that so every kid is kind of giving.”