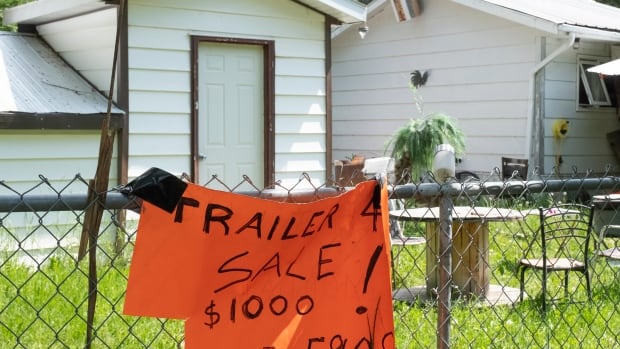 For years, a small community has lived in a trailer park tucked away in the trees along the South Saskatchewan riverside on the outskirts of Saskatoon.

The area is known as Leisureland.

“It’s like a hidden gem, a little sanctuary,” said Jackie Jenson, who has lived in the area for nine years as part of the housing co-operative south of the Queen Elizabeth Power Station.

The secluded area is quiet, with towering trees and abundant wildlife. Jenson said she learned about it when she was going through a rough patch, and as time went on she stayed because of the affordability and the nature.

“The quality of living here is unparalleled.”

Now Jenson and her neighbours are saying goodbye to Leisureland. They had a 25-year lease agreement with Meewasin Valley Authority (MVA), which owns the land. That lease expires this year and MVA is not interested in renewing it — devastating news for the few remaining residents.

“It’s heartbreaking, and it makes me cry to even talk about it,” said Jenson.

“I’m trying to be positive and be grateful that we had the opportunity. Most people don’t even know this place exists, right?”

Jackie Jenson said the act of downsizing her four-bedroom trailer was emotional, as was saying goodbye to her extensive garden and her ‘resident squirrel.’ (Kendall Latimer/CBC)

People have used this area, in the RM of Corman Park, for decades. Cottagers camped on the site as early as 1915, said an MVA spokesperson in an emailed statement.

“It has a long history and there has had been a campground, and there was even an amusement park here pre-us,” Jenson noted.

The area peaked in the 1960s, when local landowner Mike Egnatoff transformed the area into a mini-amusement park called Leisureland. The site was active for 20 years, with mini-golf, ball diamonds, a miniature train, a Ferris wheel, concessions and a catering facility.

But the fair did not go on forever.

Egnatoff told The Phoenix in 1977 that he had big ideas for the place, but he didn’t have time to run or develop the site. He also couldn’t afford to pay someone else to do it, and wished the city would redevelop the land.

“… so the ferris wheel and all the other rides that used to rock and whiz and whirl their young patrons through space have been pushed over, partly dismantled, or otherwise made less tempting to the small fry who visit the place,” wrote journalist Eric ‘o Burt.

A seasonal camping site evolved into a permanent collection of mobile homes running as a community co-op.  There were 17 service lots by 1997 when MVA purchased the property.

“Part of the agreement to purchase included a clause that allowed the mobile homes to remain on site, leasing their space as a self-managed co-operative, for a 25-year term,” said the MVA spokesperson.

The number of people living out there has dwindled over time. Without a public attraction on the site, spooky folklore proliferated, with some outsiders considered it a haunted place.

Jenson said the trailer park community has not been without its tragedies (like fire and death) or personality clashes, as people tried to work together as a co-operative to pay for services and manage the site.

Still, she has experienced it as a kind of paradise.

“This place has taught me that there is beauty all around us, if we choose to open our eyes and see.”

But the oasis was never promised forever.

MVA said it has had “consistent communication with the co-op for the last 25 years” about the lease end date. A rickety sign is even posted at the community entrance, noting 2022 as the end date.

Still, the residents hoped the MVA would have had a change of heart. 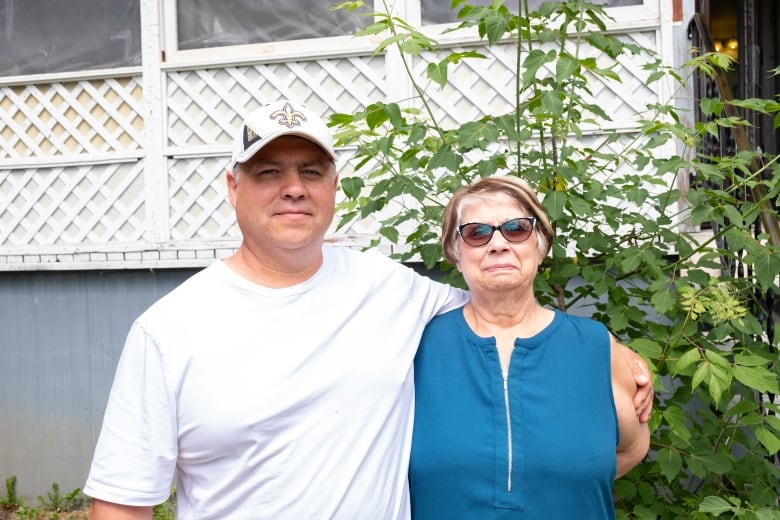 Sheldon Fisher and his mom Karen are sad to say goodbye to their Leisureland homes, but they plan to hold onto the good memories. (Kendall Latimer/CBC)

Leisureland resident Sheldon Fisher said they asked MVA for some wiggle room on the lease, pushing for an extension.

“Maybe to extend it for a year, five years, 10 years or anything, really.”

Fisher has lived there for four and a half years and is the co-operative’s treasurer. He and his wife Michelle are sad to leave, but they’re more worried how the move will affect his mom Karen, who has lived there for 18 years, and their neighbour Anne, who has been there for nearly three decades.

“This place is just  — I honestly didn’t know it existed either until my mom moved in here years ago. And I thought, ‘holy crap, is this ever gorgeous and quiet and peaceful,”’ he said. “It’s tough. It’s going to be an emotional thing to leave.” 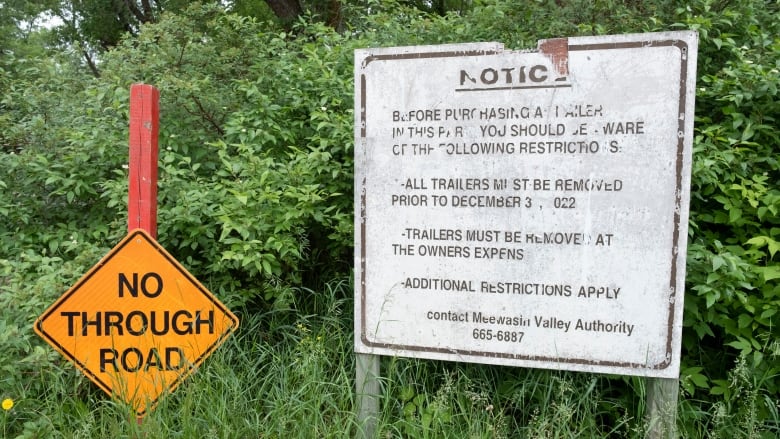 A tattered sign is posted at the entrance to the Leisureland mobile home community, notifying residents and potential buyers that all trailers must be removed prior to December 2022. (Kendall Latimer/CBC)

Residents must remove their property, including trailers and other items like sheds, garages and play structures, from their site. 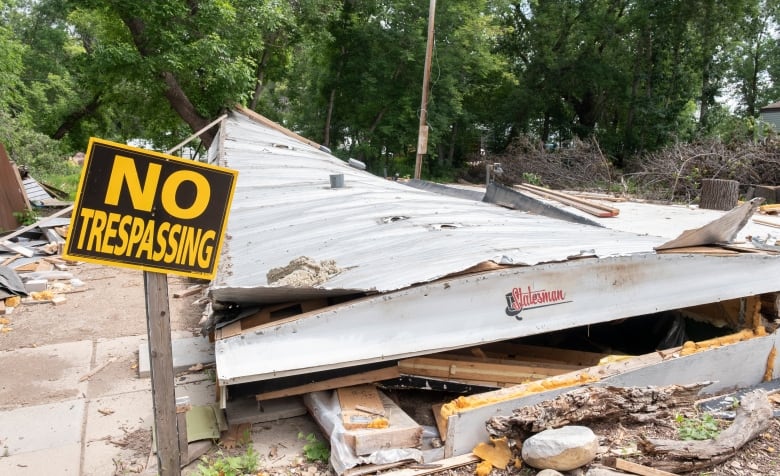 Some residents have been unable to sell their trailers so they have razed the buildings to part out and get rid of. (Kendall Latimer/CBC)

Jenson said it’s been hard for residents to sell their trailers, because they can’t find their certification stickers or can’t find buyers.

“It’s been challenging because we had a single parent family here. We have elderly, disabled, low-income people that are required by this lease to remove these trailers.”

Some residents have chosen to knock theirs down and part them out. Others plan to stay at Leisureland until the day services shut down.

Plans for the land

Once the land is cleared, Meewasin expects the site to exist in a predominantly natural state for now, “with potential opportunities for low impact passive recreation.”

It’s not easy to remove all traces of human activity. There are still remnants of the amusement park decades on, including mini-train tracks snaking through the grass.

A rickety red merry-go-round and a star-topped children’s slide remain at the trailer park’s perimeter. 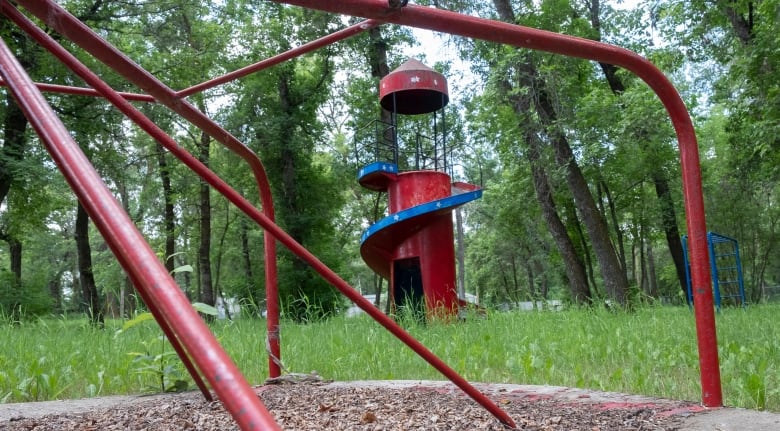 An abandoned children’s play structure remains at the perimeter of the Leisureland trailer park. (Kendall Latimer/CBC)

Looking long-term, MVA said there are plans to extend the Meewasin trail south from the Gordie Howe Bridge, so this location would become the southern trail terminus on the west side of the river.

MVA says this would involve community consultation, and would only begin after it completes the current work to develop an environmental baseline inventory and site resource management plan.

“As we approach the end of the co-op’s lease, Meewasin is initiating a master planning process that will provide a basis for future decision making, including plans for development and operations,” the spokesperson said. 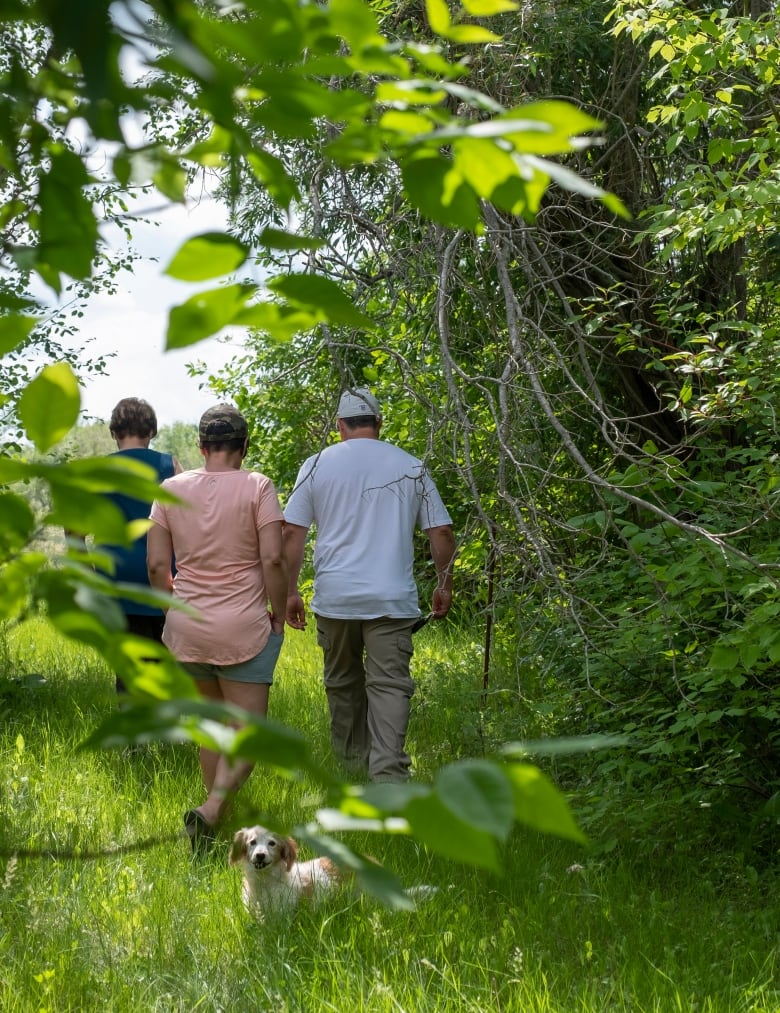 Karen Fisher, left, walks alongside Michelle and Sheldon Fisher — and Bud the dog — along the trail from their yard out to the river. They fondly call the area ‘Grannie’s beach.’ (Kendall Latimer/CBC)

The last remaining Leisureland members are also looking forward to what’s next, while also feeling grateful for what they had.

“It does have a long history and I’m just feeling really fortunate to be able to be here at the end, I guess,” Jenson said. 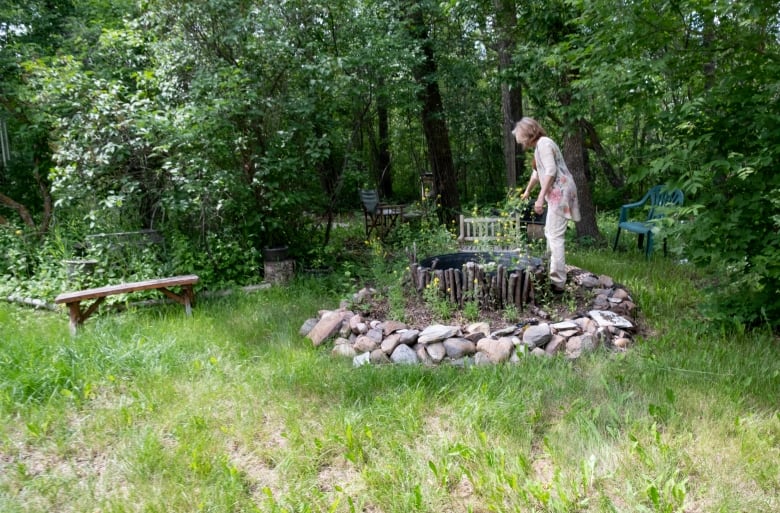 Jackie Jenson is pictured in part of her expansive back yard, which featured multiple gardens and gathering areas within the trees. (Kendall Latimer/CBC)