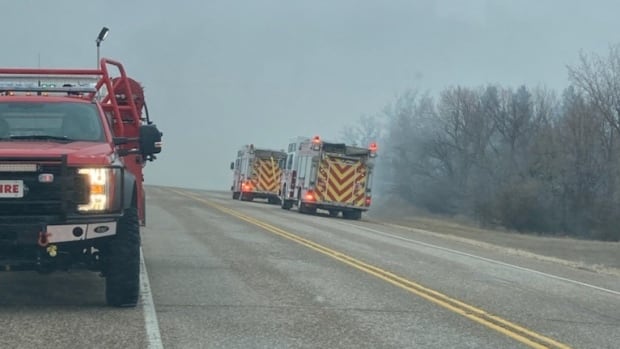 A controlled burn got out of hand this week near Saskatoon in an apparent “zombie fire.”

These kinds of fires happen when a fire is deemed inactive over the winter time but is actually still burning under the snow.

Mike Given, fire chief of the Delisle and District Fire Department, was on scene Tuesday fighting the fire near Highway 60, southwest of Saskatoon.

He said this fire was a controlled burn for a tree line, which happened in November.

He explained after the snow falls, a “little oven” can be created underneath the snow where it will feed off any oxygen and dry organic material surrounding it.

“It can live the entire winter underneath that pile, so as spring comes along and [the] snow melts and the winds pick up, the heat picks up,” Given said. “On the outside, the ground starts moving, as it does here in the province, it moves a little bit up and down and it catches a little bit of that oxygen.”

“It can relight all by itself, it can sit there for four or five months and it’ll rekindle.”

He said the embers can also lay dormant in dead roots underground and it can migrate from the original pile and pop up in a new location.

The fire was reported on Tuesday and Given and his team were out all day fighting the zombie fire.

The Saskatoon Fire Department said the flames consumed a trailer and potentially a few vehicles.

“The only way that I believe you’d be able to mitigate something like this is you’d have to get in there with a track hoe, bobcats, something like that, and dig that all up and turn it over,” Given said.

There was another fire on Monday near Saskatoon that was classified as an uncontrolled fire that was once controlled, but there is no confirmation it was a “zombie fire.”

Monday’s fire happened several kilometres from the Beaver Creek Conservation area and the Meewasin Valley Authority said it doesn’t do controlled burns. Instead, it does something called prescribed burns.

“We were not doing any of our prescribed burning programs that day, and the fire was not even near our site,” he said.

Grilz said the difference between a controlled burn and prescribed burn depends on conditions for when the burn takes place.

“A controlled burn is really, you know, you’re a land owner, you phone in to the provincial hotline to register your burn or with the local municipality, you get your permit and you burn a brush pile,” he said.

Grilz said when planning a prescribed burn, there are more considerations taken into account, such as wind speed, which way the smoke will blow and humidity at the time of burning to meet specific management objectives.

“Every year we prepare 15 to 20 different prescribed fire plans in and around Saskatoon,” he said. “And if we’re lucky, we might implement five burns within a season because we’re so specific with the conditions that quite often we’re not we’re not able to implement those burns in a given year.”