Marquis Downs, however not out as horse racing returns to Saskatoon 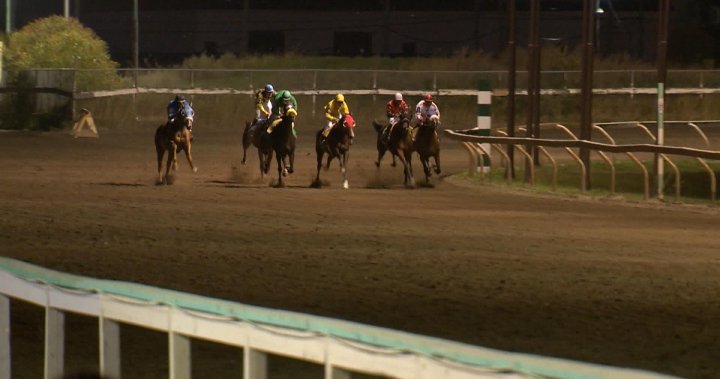 The gates at Marquis Downs in Saskatoon will be opening back up on Aug. 27 for 10 days of thoroughbred horse racing events.

‘We think that Saskatoon is due’: New soccer stadium plans unveiled in the Bridge City

“Acquiring this licence and going through the rigorous application process is the first milestone on a path to building to the long-term vision of Moosomin Downs and for our participation in the economy of our First Nation,” said Chief Cheryl Kahpeaysewat of Moosomin First Nation.

She noted that this is a big key for success for Moosomin First Nation, and helps build the opportunities for their children in the future.

Wagers for the upcoming races will be available on site, or on the HPIbet Network.

“When it was announced that horse racing would be coming to an end at Marquis Downs last year, so many people were affected from those who are drawn to the horse spirit to the families who continued generations of tradition and horse expertise. Moosomin seized the opportunity that many said would not happen, they made it happen and are unanimously supported by our Chief’s in assembly on this endeavor,” said FSIN Chief Bobby Cameron.

MD&E said it is developing a racetrack in the Corman Park rural municipality, and hopes to break ground next year.

The new track will replace Marquis Downs, which shuts down sometime near the end of this year with a multi-purpose arena proposed for the area.

Rob Woods, CEO for Moosomin Economic Development, said they have about 980 acres of land just outside of Saskatoon by the Saskatoon Shine sign.

“That’s where we’ve allocated 140 acres for this project. So this is just one of many projects that will become on those lands.”

He added that the 10 days at Marquis Downs kicks off the Nation’s ability to participate in the industry as an operator.