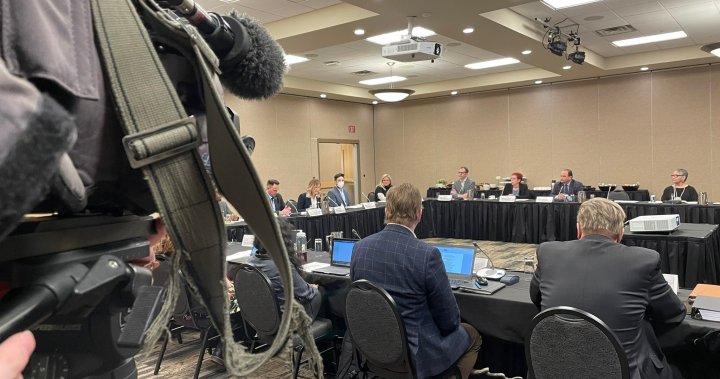 The City of Saskatoon convened the first meeting of city staff along with community and business leaders to help determine the fate of a potential downtown convention centre and arena.

The officials, representatives of business districts and local organizations met at TCU Place Wednesday as part of an advisory committee to help push the project forward.

It’s a significant new phase for the project, which began years ago.

The entire meeting was private, aside from opening comments, so only participants and city staff know what was discussed.

Before media were ushered from the room, city councillor and committee co-chairperson  Cynthia Block told reporters she was overwhelmed the project reached this point.

“I think that the Downtown District and Entertainment Centre affords us the opportunity to have an integrated, coordinated and seamless experience in our downtown,” she said, drawing a distinction between the out-of-the-way and ageing SaskTel Centre (and central but ageing TCU Place).

“I think (a downtown arena is) going to be wonderful for our generation and those that come after us for a long time to come.”

She said the city could unveil a shortlist of locations in a matter of months.

Fellow councillor and chairperson Troy Davies said the city staff had completed a lot of work over previous years and visited many cities.

“What we learned from Oak View Group, that finished building the Seattle arena and New York Islanders arena – the importance of what you need as a foundation before you can start is where we’re at today,” he said.

But Concordia University economist Moshe Lander is cautioning that arenas are not the city-boosting projects many public officials seem to think.

They boost growth, yes, but they don’t spark it, he said.

“What often happens is that city councilors will often get confused between these two ideas, and they think that merely, you know, (like the movie) Field of Dreams— ‘if you build it, they will come,’” he said in an interview.

“No, that’s absolutely not going to be the thing that happens.”

StatCan data shows Saskatoon’s downtown grew less than three per cent between 2016 and 2021 — one of the slowest measures of major Canadian cities in that time.

The overall city growth was just 7.6 per cent.

Lander said downtown is still the right spot and that it will boost local businesses and hopefully keep people downtown, but he said scale is key.

Saskatoon could host events like the Scotties or the Bryer, he stated, not a BTS concert.

He said the city should also be mindful of rising costs, which will make years-long construction more expensive.