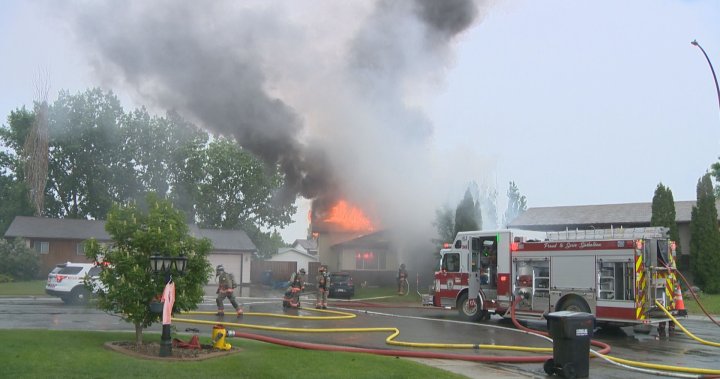 The Saskatoon Fire Department (SFD) says the roof of a house has been destroyed but no one was injured following a fire Friday morning.

The SFD says it received multiple calls that a house was on fire on Kirkpatrick Crescent at 8:50 a.m. on Friday.

It sent three fire engines, one ladder truck, one rescue unit and a battalion chief. Crews found a house with an attached garage with significant fire and smoke.


A house on fire on Kirkpatrick Crescent in Saskatoon.

The SFD says crews began attacking the fire aggressively with multiple large lines to knock it down. They said there was significant damage to the house, including loss of the roof structure.

There were no injuries as a result of the fire. Mike Grisdale, fire investigator, said there were some pets in the house and one cat was rescued by fire crews and given oxygen.

Debby Mccolm, a resident in the neighbourhood, said she was leaving her house to take the kids to school at 8:15 a.m. and nothing was happening, but when she got back the fire was already full-blown.

“I know they have a little one. I hope everybody got out; I think they did. If they need anything they can reach out, I can donate. I have little ones too,” Mccolm said.

“I’m hoping their security system was working and everyone got out, that’s my main concern.”

Grisdale said the first call came in as a garage fire.

“It was challenging because … the fire had extended to the neighbouring garage,” he said.

Mark Nazar, a resident of the area, was also on the scene of the fire.

“I was just backing into my driveway and I see a bunch of smoke coming up in the air so I just drove over here to see where the smoke is coming from and then I see this house on fire and I was little bit kind of surprised to see what kind of a flame was coming out of there,” Nazar said.

“It was a pretty good fire but it’s kind of sad that the people gotta go through this now, try to clean up. It’s a sad situation.”

From its preliminary investigation, the SFD said the fire started on the exterior of the house and spread across the whole structure.

The fire is under investigation and further information will be provided when available, the SFD said.