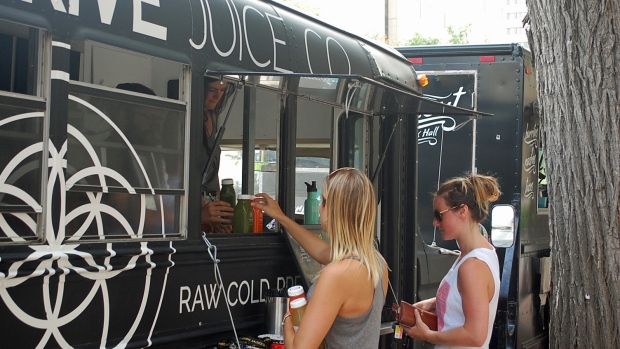 Snackmap.com, a locally developed website that uses GPS technology to track the whereabouts of food trucks in the city, launched last week.

The site uses Google Maps to show where each food truck is located. It also states whether or not the truck is open for the day.

“We started by just sitting around the office, wondering, ‘How can we find these food trucks?’ We were trying to following everyone’s Twitter feed. We figured, ‘There’s got to be a better way to do this’ ” said Evan Taylor, a web developer with Nova-Tek.

The easiest part for Nova-Tek was convincing food truck owners to place the trackers in their vehicles.

“We were more than welcome to have them help us out,” said Cole Dobranski, co-owner of Congress Beer House and the Ace Burger food truck. “It just gets everyone in Saskatoon to know exactly where we are, so why wouldn’t we want to do it?”

Saskatoon has so far been very supportive of food trucks, Dobranksi said.

Snack Map recently gave another local website permission to use their technology.

Yxestreetfood.com, according to its creators, is devoted to all things food truck in Saskatoon. The site includes descriptions of each food truck, an online method to book food trucks for events and, as of this week, the Snack Map widget.

The street food site creators were also working on a way to map food trucks’ locations, but Nova-Tek beat them to the punch.

“No, it’s not a race to the punch. I think they’re doing a different thing than us. The map was just a small part,” Chad Reynolds, co-creator of YXE Street Food, said. “I’m happy to be working with them. It’s good.”

Reynolds considers his site more of a promotion tool for food trucks in the city.

The YXE Street Food crew is organizing a food truck festival — or, in their words, a Street Meet — for September. No exact date or location has been set. The pair is hoping to release details on the festival sometime after the August long weekend.