‘No one reached out to me,’ says Saskatoon tribal chief about Sask. bishops residential faculty survivors fundraiser 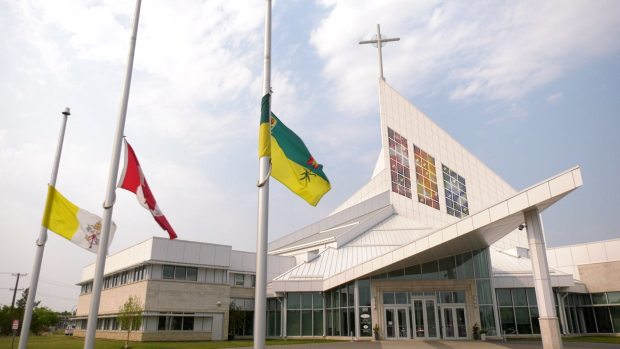 SASKATOON —
The Saskatoon Tribal Council chief says no one reached out to him about a fundraiser for residential school survivors from Saskatchewan bishops – despite the bishops saying they’re collaborating with Indigenous partners.

“I didn’t know nothing about it. Nobody has ever reached out to me,” said Mark Arcand.

“Maybe they shouldn’t have to, but common courtesy would say the tribal chief of the Saskatoon Tribal Council should be reached out to.”

Arcand said he first heard about the fundraiser on Wednesday through a news article.

The initiative follows the Federation of Sovereign Indigenous Nations (FSIN) calling on the Catholic Church to honour a 2006 commitment to raise $25 million in compensation for its role in Canada’s residential school system.

The fundraiser’s website says “we are collaborating with potential participants, and consulting with Indigenous dialogue partners, including survivors, elders, knowledge keepers, chiefs and other community members.”

Arcand said he believes the Archbishops should reach out to the STC, instead of the other way around.

“I won’t be reaching out to them because I’m not going to look like I’m begging,” he said.

“They want to reach out and do the right thing and work with Indigenous leaders and Indigenous people to correct some of the wrongs.”

Arcand said he’s hesitant to be optimistic about the fundraiser.

“(I’m) not really counting on it because I don’t know what the outcome will be, so we don’t want to set our hopes up for failure if it doesn’t come through.”

According to the website, the fundraiser has three priorities: Healing and reconciliation, cemeteries on the sites of former residential schools and education and cultural support. The campaign started on Tuesday.

Raissa Bugyi with the Diocese of Saskatoon Catholic Foundation said they’re overwhelmed with the response after announcing the campaign, and they’re aiming to raise $13,000 dollars in the next two days.

“The people of Saskatchewan needed this. We are getting donations from Quebec, Ontario, from B.C., from Catholics and non-Catholics,” Bugyi told CTV News.

She said within five minutes of the campaign being on the site, people started to donate.

Bugyi said it’s an opportunity for people to step up to show their support for Indigenous people.

“We all need to be held accountable for what has gone on to Indigenous people in our province.”

People looking to donate can use cheques, pre-authorized debit or by credit on the website. The bishops say more details of the initiative, including the fundraising goal and time frame, will be announced by September.