The Saskatoon SPCA discontinued this service in Saskatoon in April after the province denied a funding request last fall. 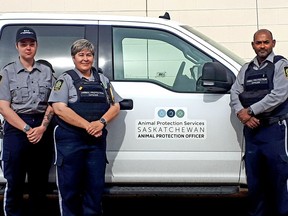 The Saskatoon SPCA discontinued this service at the beginning of April due to lack of provincial funding for this work.

The SPCA made the announcement in January after the Ministry of Agriculture denied its request for funding last fall. Provincially contracted workers have responded to calls and some calls have been referred to the Saskatoon police.

The Saskatoon Animal Control Agency — which handles animal-related bylaw enforcement in the city — and the ministry did not formalize the agreement for the local agency to provide animal welfare enforcement services in Saskatoon, the City of Saskatoon said in a statement.

The city said the ministry instead maintained enforcement services through the use of contracted personnel through the transition period.

The Ministry of Agriculture, in a statement, pointed to the doubled provincial funding to the APSS — to $1.6 million — in the 2022-2023 budget towards the service expansion, and it said it looks to continue working collaboratively with all agencies within Saskatoon.

The APSS previously said the increase will allow it to expand from eight to 10 animal protection officers and hire another dispatcher.

The ministry said the APSS, an enforcement agency entering a new jurisdiction, needed time to set up logistics and infrastructure and hire and train new staff.

After reviewing its options, the ministry said it “organized the necessary resources and worked with APSS to ensure a qualified team was in place to provide appropriate animal welfare enforcement during this transition period until APSS begins coverage in Saskatoon as of July 1, 2022.”

It said the APSS would provide its services in Saskatoon on weekdays, as it does in other cities and in rural Saskatchewan. Emergency after-hours concerns should be forwarded to city police, the ministry’s statement said.

Saskatoon Police Service spokeswoman Alyson Edwards said in an email that discussions between the city, the province and police continue on the level of service of animal protection enforcement.

Police receive about one call a day regarding an animal welfare complaint, and most fall under the city bylaw and are dealt with by the SACA.

Others, which fall under the provincial act, are dealt with on weekdays by provincial contractors, but there is currently no agency assigned to respond after hours and on weekends, she said.

“While those calls may be referred to police, we do not currently have the equipment, training or shelter agreements in place to respond and enforce the (Animal Protection Act). In addition, our officers must first respond to higher priority calls for service,” she wrote.

APSS executive director Don Ferguson said they are currently working with the City of Saskatoon to have the current animal services number, which directs all animal-related calls, remain the same.

By choosing the option to report animal abuse or neglect concerns, a caller would then be automatically directed to an APSS dispatcher. The APSS also has an online reporting option.

“Despite the abbreviated timeline APSS is confident that we can deliver the same level of service to the city of Saskatoon as we do the rest of the province starting July 1,” Ferguson said in an email.