PFC: Saskatoon Hilltops survive battle of the turnovers in opposition to Winnipeg Rifles 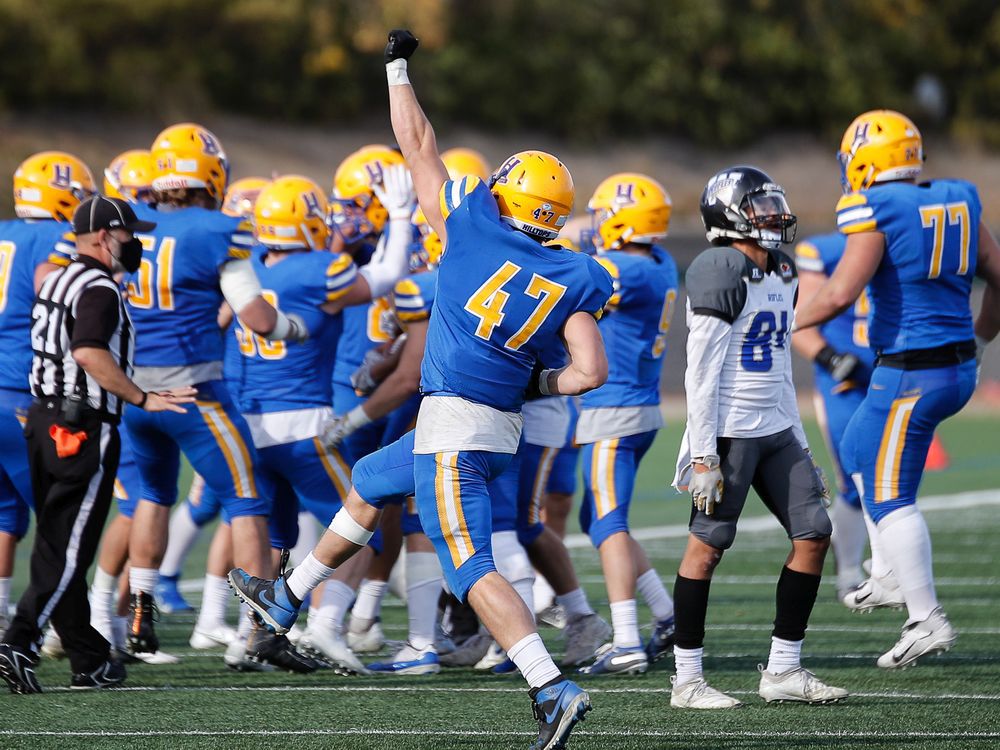 “Our special teams and offence weren’t to standard, weren’t up to snuff today.”

The game featured a bit of everything, and not all of it good as far as the Saskatoon Hilltops were concerned.

Sure, the Hilltops were able to defeat the visiting Winnipeg Rifles 25-10 Sunday afternoon at SMF Field in the Gordie Howe Sports Complex, but it wasn’t exactly all systems go for the host team.

While Saskatoon’s defence held its own, especially in the second half, the team’s offence sputtered and misfired numerous times. Special teams weren’t that special on this day, either.

The Hilltops went 1-for-3 in the three phases of football, yet somehow pulled out the win.

“It’s been a while since we’ve got a ‘w’ so that’s certainly a good feeling,” said Hilltops head coach Tom Sargeant. “But, once again, we certainly didn’t play 60 minutes today and we didn’t play with a lot of consistency. I felt our defence in the second half was spot-on and played the way we expect them to play.

“Our special teams and offence weren’t to standard, weren’t up to snuff today. That’s disappointing, so lots of work ahead of us.”

Saskatoon, which improved its Canadian Junior Football League’s Prairie Football Conference record to 3-2, will play host to the second-place Edmonton Huskies (4-1) next Sunday at SMF Field.

“That’s an absolute money game,” said Sargeant. “Lots at stake there. We’ve certainly got to improve our performance and our play if we’re going to put ourselves in some meaningful situations in the future.

“Right now, we’re making too many mental mistakes. We get in our (own) way and don’t allow us to play a game of energy and momentum.”

Ethan Godson had a big game against the Rifles with eight catches for 118 yards and a touchdown.

“For sure, we’re kind of riding some waves right now — we’re having some good drives but then little mistakes are holding us back,” said Godson.

“We’ve just got to get a little more consistent and start driving the ball all the way down the field and finish our drives.”

Defensively, the Hilltops muzzled the Rifles in the second half thanks to two interceptions and two fumble recoveries, plus a turnover on downs.

“That’s huge,” said Godson. “They made some big plays. It’s great to see. They’re getting us back on the field.”

Hilltops starting quarterback Damon Dutton completed 21 of 33 passes for 205 yards and three touchdowns to go along with three interceptions.

Boston Davidsen rushed the ball 21 times for 137 yards and one major for Saskatoon, which led 13-10 at the half.

Rifles quarterback Thomas Hubbard completed 15 of 28 passing attempts for 135 yards and two interceptions. Bryson McNeil was 0-of-4 and picked off once.

Ivan Jaque carried the ball 13 times for 53 yards and a TD for Winnipeg, which led 10-7 after the opening quarter. Everett Findlay had four catches for 48 yards. Luke McMillan added five receptions for 40 yards.

Again, it was a game of everything.

The Rifles opened things up with a successful on-side kick on the opening kickoff. Overall, there were six interceptions, three fumbles and four turnovers on downs, including one on a botched snap during a punt attempt by the Toppers.

But, in the end, the Hilltops snapped a two-game losing streak.

“We needed to get back in the win column after those two (losses) in a row,” said Godson. “I think there’s a lot to work on, though. We’ve got to be more consistent. That’s the biggest thing. We have some good drives but then we can’t finish them — stuff like that.”

“Winning just brings winning,” stressed Sargeant. “At the end of the day, it’s good to get this under our belts. Right now, we’re 1-and-0 and it certainly beats being 0-and-2 over the last two games (against Regina Thunder). And look at those games, we were a play away in both of those games.

“Today, we were a play away from not being in good spots, either, so there is some frustration starting to set in a little bit. As coaches, we’ve got to temper that. We’ve got to be honest and real and this group of players right now has a long ways to go. We’ve got to be excited about that.”

2,000-plus meals hampers assembled to assist Saskatoon folks in want