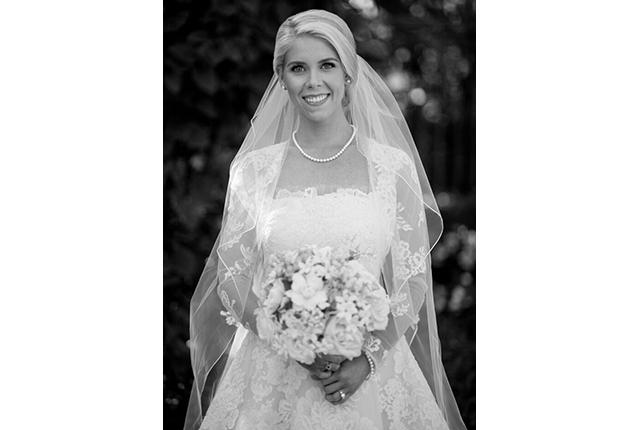 The bride is the daughter of Dr. and Mrs. Reid Guyton Pierce of Pine Bluff, Arkansas, and the groom is the son of Mr. and Mrs. James Grant Hortenstine of Saskatoon, Texas.

Accompanied by her father, the bride wore a couture dress designed by Oscar de la Renta. The strapless dress made of ivory-colored, newly embroidered and floral Chantilly lace showed a fitted top that was accented with a beautiful illusion long-sleeved bolero made of Chantilly lace. The full A-line skirt fell into a soft, circular chapel train. To complement the dress, the bride wore an ivory-colored cathedral veil with embroidery lace.

The guests were Bud Dillard from Fort Worth, Texas, Jake Long from Brady, Texas, and John Rutherford from Saskatoon, Texas. Readings during the ceremony were conducted by Julia Caple of New York, New York. Bailey Troutt and Maddie Solari, both from Dallas, Texas.

Following the ceremony, guests were invited to a reception at the River Oaks Country Club, where they enjoyed a dinner that combined the flavors of Texas and the couple’s honeymoon destination, Italy. The band was Memphis Train Revue from Austin, Texas. Flowers were displayed in ivory and blue themes, with large and small arrangements at tables. The bridal cake consisted of 6 layers with roses, gardenias and magnolias between the layers and was made to match the top of the wedding dress. The groom’s cake was made to replicate his favorite cowboy boots.

The happily married couple took their short break in a white Rolls Royce and will be in Italy for the next 2 weeks. Upon their return, the couple will live in Saskatoon, Texas.

The groom’s parents hosted the rehearsal dinner at the Saskatoon Country Club.

The place to Order Christmas Dinners To-Go in Saskatoon