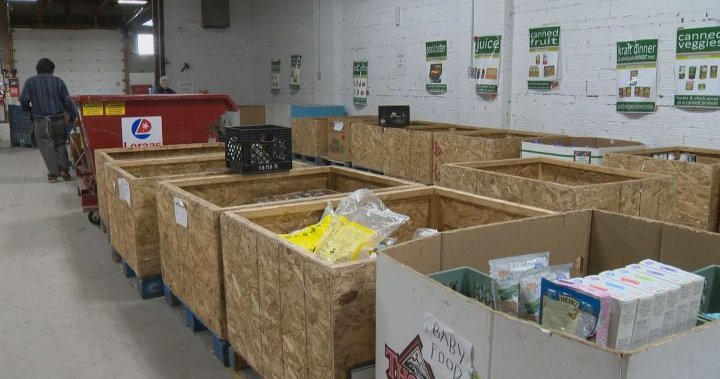 It’s a slow time of year for donations at many food banks across the country and Saskatoon is no exception.

“We definitely see a drop in donations in these two months and it is worrisome because our next big drive isn’t until May,” said Laurie O’Connor, executive director of the Saskatoon Food Bank and Learning Centre.

What’s also concerning is the number of people turning to food banks.

A new impact report by Food Banks Canada shows more children in Saskatchewan use food banks than anywhere else in Canada.

“We’re still seeing around 20,000 folks using our services in a month and about 45 per cent of those are children,” O’Connor said.

“That national average is a little bit lower than that — around 35 per cent,” O’Connor said.

Saskatchewan’s advocate for children and youth, Corey O’Soup, said the numbers are alarming, and poverty remains at the core of the issue.

“There are some basic rights that our children have that aren’t being upheld,” he said. “I think we need to really look at those and the government needs to take a really good hard look there.”

The Saskatoon Poverty Reduction Partnership (SPRP) is working to curb the cycle of poverty, recently launching a series of bold ideas — a collaboration of many different agencies and people, including the food bank and those living in poverty.

Colleen Christopherson-Cote, SPRP coordinator, said the ideas would be implemented as a collective of things. “Those things include a change in the way income is looked at, the idea around asset building, access to transportation, free transit, childcare.”

She adds, poverty is ultimately a complex issue and based on individual circumstance.

“It’s really important to think about how systems are built and what policy looks like so that it impacts society, but has direct individual impacts as well.”

O’Soup said more needs to be done to implement the province’s poverty reduction strategy, adding the results of children going hungry are immeasurable.

“I believe the long term solutions to child poverty to child hunger are investing in our children and youth early and often,” he said.

“If our kids get educated, if our families get educated, they can break that cycle of poverty and homelessness and hunger and I don’t think we do enough of that here in the province.”

Meanwhile, with poverty affecting people’s health, and as the food bank gears up for its next big drive in the spring, O’Connor encourages people to donate with nutrition in mind.

“Think about whole grain cereal and whole wheat pasta, pasta sauce — things that are really going to make a difference in the lives of folks who are struggling.”

Listed here are the COVID-19 testing, vaccine and masks guidelines for the Eric Church live performance in Saskatoon