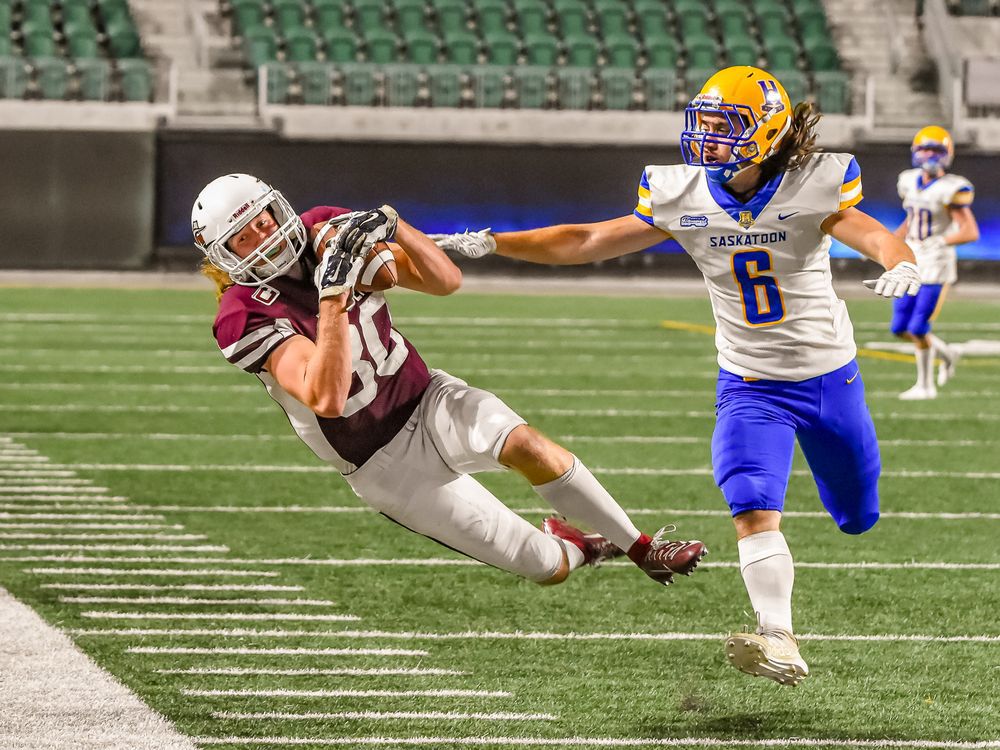 A late TD pass from backup quarterback Zenon Orobko to Isaiah Woodley was the difference Saturday as the Thunder edged the Hilltops 30-27.

Despite an injury to starting quarterback Carter Shewchuk, the Regina Thunder stormed back for a down-to-the-wire victory that greatly enhanced its chances of dethroning the Saskatoon Hilltops and finishing first in the PFC.

A 36-yard touchdown pass from No. 2 signal-caller Zenon Orobko to Isaiah Woodley with 1:14 left in the fourth quarter proved to be the difference as the Thunder registered a dramatic, three-point victory over the arch-rival Hilltops for the second successive Saturday.

One week earlier, Eric Maximuik‘s 51-yard field goal on the final play had given Regina a 16-13 road victory and snapped Saskatoon’s winning streak at 33 games. Then Orobko and Woodley performed their heroics as Regina won 30-27 at Mosaic Stadium and improved its record to 4-4. Saskatoon, winner of the past six PFC and CJFL titles, dropped to 2-2.

“It’s a storybook — it really is,” said Orobko, whose father Pat is an ex-Hilltop. “You can’t draw up anything better than that.”

Orobko took over behind centre after Shewchuk suffered a right shoulder injury, which is not thought to be serious, late in the third quarter. Regina led 23-20 at the time.

Without Shewchuk, the Thunder’s offence sputtered until its final possession — a seven-play, 89-yard scoring march.

Regina was in a first-and-25 predicament when Rylan Sokul made a spectacular catch along the right sideline for a 42-yard advance. Woodley scored three plays later.

Hutton then moved the Hilltops 52 yards in eight plays before being intercepted in the end zone by Justin Mckerracher with seven seconds remaining, punctuating a classic contest.

“These two teams love playing against each other,” Hilltops head coach Tom Sargeant said, “and they bring out the best in each other.”

The news seems to be flying at us faster all the time. From COVID-19 updates to politics and crime and everything in between, it can be hard to keep up. With that in mind, the Regina Leader-Post has created an Afternoon Headlines newsletter that can be delivered daily to your inbox to help make sure you are up to date with the most vital news of the day. Click here to subscribe.