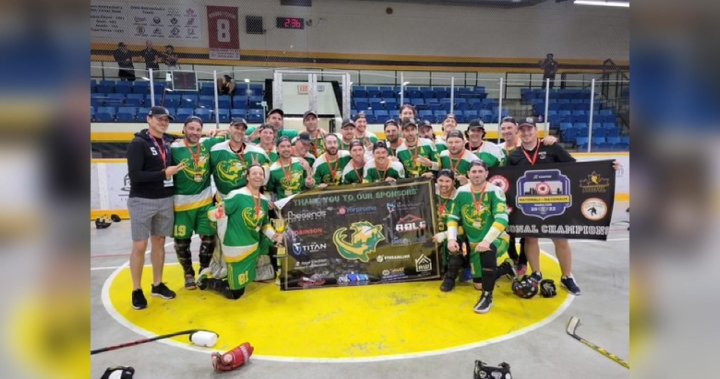 Ball hockey is a sport growing in popularity in rural towns, on the street and throughout Saskatchewan.

That can be said for a bunch of teams from Saskatoon, consisting of players from across the province, bringing home some medals from recent competitions from nationals in Hamilton, Ont., and the Czech Republic.

Teams in the men’s and women’s divisions brought home a total of four medals from recent competitions, winning two gold and a silver from nationals and a bronze at worlds.

For the men’s buffalo squad, it’s been a long time of hard work and perseverance to finally come home with a medal after years of not being able to get onto the podium.

The competitive, growing game in Saskatchewan has prepared the team for the spotlight on the bigger stage.

The team won their quarter-final match in a shootout before winning the semi-final game 6-5 in OT to reach the final.

The women’s team faired even better, winning gold for the first time ever.

“Yeah, what we did was quite the upset. It was unreal being on the floor when that buzzer went and everyone went running to the goalie. Everyone was ecstatic. Nobody expected us to win,” said forward Nikki Loewen.


Saskatoon Buffalo at Worlds in the Czech Republic with their bronze medals.


Women’s Saskatoon Stingers after their gold medal win in Hamilton at Nationals.

Forward Brock Harrison plays for both the Buffalo and Mammoth teams.

He won three medals: gold with the mammoth, silver with the Buffalo and bronze at worlds with a Mammoth team in Czech Republic.

The Mammoth defeated Team Newfoundland 2-0 in the finals.

It’s been a very successful ball hockey season for Harrison, and he is happy to see Saskatchewan do so well.

“(Mammoth) were one of the top teams this year. I think that speaks a lot for Saskatchewan because for the last ten years we have battled to make playoffs. And now we have taken the next step, which is great to see,” said Harrison.


Brock Harrison at Worlds in the Czech Republic.

The newly formed, two-year-old Premier Ball Hockey League has played a big role in getting players ready for that next level competition.

The league is in Saskatoon and surrounding areas, featuring players from across the province.

“It’s a very competitive league. It gets us prepared for nationals and even worlds,” added Harrison.

“It goes to show that the development we are putting into ball hockey here is growing,” said Magnus.

“It meant that there are a lot of people competing at decent levels. Our team had different from the girls that were there last year competing for the women’s team,” added Loewen.

Creator of the league Justin D’Entremont also had successful trips for ball hockey, winning three as a player and one as a coach.

“My goal is to expand this league to other provinces, Alberta, B.C., Manitoba. I feel it’s an easy game to get involved in, is not expensive and is for people of any age.”

“Everyone from Saskatchewan or someone you know has played ball hockey or street hockey at some point in their life.”