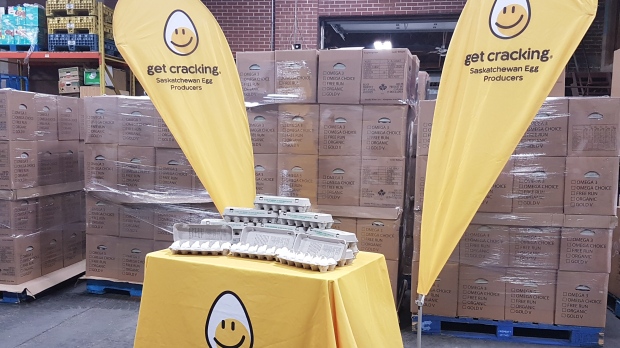 Saskatchewan Egg Producers are helping to feed families in the community with a donation of 6,000 packages of a dozen eggs to the Saskatoon Food Bank.

“We think this is a meaningful donation because eggs are nutritious, they’re a great source of protein and they make a good addition to the food hampers that are given out by the Saskatoon Food Bank,” said Shawn Harman, chair of Saskatchewan Egg Producers.

According to Harman, the donation – which amounts to a total of 72,000 eggs – is the largest donation in Saskatchewan history to any one organization.

The eggs were donated as part of Hunger Action Month, a national initiative to challenge people and organizations to think about hunger in their communities, and to take action.

“It’s almost unbelievable to have this much amazing nutrition and protein in our building all at one time,” said Laurie O’Connor, executive director of the Saskatoon Food Bank. “It shows that as we come together as a community, we can really make a difference in folks’ health and nutrition when they’re living in poverty.”

Eggs are not only a source of protein, but according to O’Connor, they can also be a staple for many meals.

“They’re easy to cook, of course. Folks can use them for a variety of things – so whether it’s for a meal or in addition to some of the other ingredients that they have, if they’re trying to get school lunches ready they can have those for kids,” she said. “They’re such a versatile food.”

O’Connor says it’s often a struggle for the food bank to provide sources of protein in their food hampers, and the egg donation will be of benefit to many families in the city.