Saskatoon begins course of to rename John A. Macdonald Street 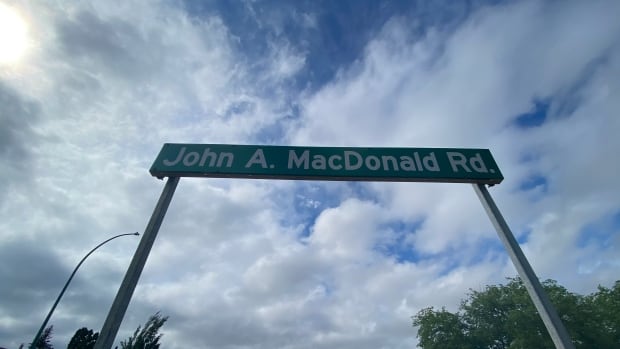 Change is coming for Saskatoon as officials begin consultations to rename John A. Macdonald Road, following the discovery of unmarked graves by residential schools across the country.

Macdonald was Canada’s first prime minister and a key architect in the residential school system, which housed Indigenous children taken from their families from the 1870s to the 1990s.

Saskatoon will begin consulting Indigenous leaders, residential school survivors and knowledge keepers in the coming months in order to determine a new name for the thoroughfare, the city said in a news release Friday. No one was immediately available to comment on it.

The residential school system resulted in the neglect, abuse and death of thousands of children, and left survivors and their descendents dealing with the consequences. The 2015 Truth and Reconciliation Commission’s final report describes the schools as “a far-reaching system by which the federal government sought to regulate Aboriginal life.”

“[Macdonald] was instrumental in creating residential schools that, to this day, have affected our people in a negative way,” Arcand said in June, when he called on the city to change the street’s name.

WARNING: This story contains distressing details. A group of residential school survivors gathered on a Saskatchewan First Nation to share their stories and present a list of demands to the Catholic archbishop. 1:50

The unanimous vote came in the wake of recent discoveries of unmarked graveyards on the sites of former residential schools across Canada, including 751 at the former Marieval Residential School at the Cowessess First Nation, about 165 kilometres east of Regina.

The decision to rename the street is an attempt to recognize the “ongoing harm” experienced by those who attended the residential schools, the city said.

“The generations of the future will look back on this decision and believe it is the right one,” Saskatoon Mayor Charlie Clark said during the council meeting that saw the unanimous vote pass.

In addition to consultations, the city plans to hold public information sessions with those who live and own property along the thoroughfare in the west end of the city and with the broader community in Saskatoon.

The goal will be to listen to community concerns and answer any questions there may be about the renaming.

The consultation process is expected to take a few months with a report heading to city council in the fourth quarter of 2021.

The City of Saskatoon is looking at options to manage potential costs associated with the change of the street name as well as providing support where possible.

A web page centred on engagement regarding the street renaming will be available next week on the city’s website.