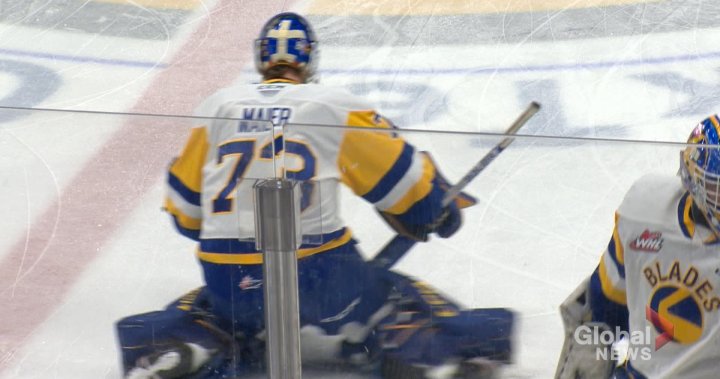 In the second-last regular-season home game of his career, Nolan Maier has reached the mountain’s peak – with 121 victories, he stands alone as the winningest goalie in WHL history.

Blades goalie ties for most career wins in WHL

The veteran netminder achieved the milestone in style shutting out provincial rivals the Prince Albert Raiders 2-0 in front of some 4,800 fans at Sasktel Centre. He turned aside all 20 shots he faced, earning his third shutout of the year.

“It’s surreal, I think it’s a moment that I’ll never forget,” Maier said. “I’m just so happy I was able to do it at home and just against our rivals, (it) almost brings a certain sentimental value to it too. It’s pretty amazing.”

“I mean it’s huge, he’s been here his whole career … played (here) since he was 16,” Blades forward Trevor Wong said. “He’s kind of the role model in this whole organization and a lot of our guys look up to him.”

It’s the second major shutout for Maier this week – Tuesday’s 4-0 Blades victory in Medicine Hat earned him a three-way tie for the previous wins record shared by Corey Hirsch and Tyson Sexsmith.

1:33
Blades goalie ties for most career wins in WHL

Blades goalie ties for most career wins in WHL

“Yeah, it seemed (fitting) after (Medicine Hat) too, to tie it with the shutout, to tie it and (now) to win it with both shutouts,” head coach Brennan Sonne said.

The win wasn’t a gimme for Maier who went long stretches without seeing a shot and was then tasked with turning aside multiple breakaways, including a Reece Vitelli break early in the first period.

Maier enjoyed the experience, especially the love felt by his teammates as they mobbed him in celebration, post-game.

“It was a little excessive, it was like we won the Stanley Cup,” Maier admitted. “They’re pretty excited and I think that’s awesome, just to have a big group of brothers in there, just how they’ve supported me all year, it’s been awesome, I couldn’t ask for anything better.”

Maier will have an opportunity to add to his all-time wins record on Friday, April 15 at Sasktel Centre when they take on the Brandon Wheat Kings.