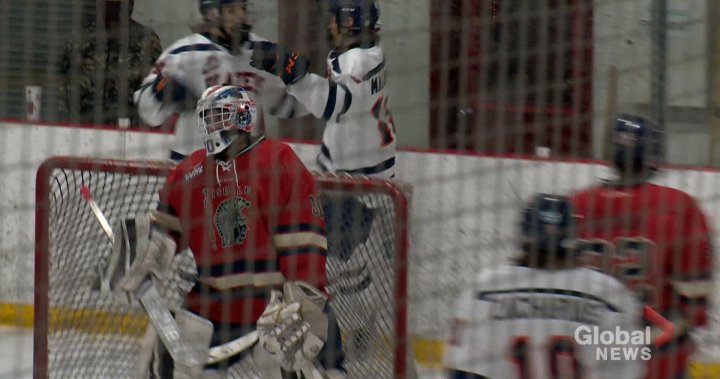 Roster turnover has rippled across teams and leagues throughout Canada this past year, a direct byproduct of pandemic-shortened and cancelled seasons.

This has been felt even more so in feeder leagues such as the Saskatchewan Male U-18 AAA Hockey League (SMAAAHL), a league that graduates players to Junior A leagues across Western Canada, as well as to major junior teams in the Western Hockey League.

Despite the major turnaround felt throughout the SMAAAHL, the Saskatoon Blazers have enjoyed success throughout the early stages of the 2021-22 season.

“You’re spoiled a little bit where you’ve got lot’s of options,” Blazers head coach Scott Scissons admitted. “It’s been fun because every day at practice we’ve got lots of things to work on and teach. So, we’re not starting from square one because we’ve got some talented kids, it’s been an interesting start to the year.”

This year’s edition of the Blazers is unlike any other. The team features 16 rookies, making them one of the youngest groups in the SMAAAHL.

“We knew coming in that they would be talented,” Scissons said. “It’s the game play and the hockey IQ that’s been impressive for me. You practice for a year and a half and the skills get sharp but you lose some of the ideas on how to compete, but they’ve done a good job of getting their compete level back.”

The players credit a mutual admiration felt within the room regardless of a player’s age or experience, which has made for a welcoming environment for the newcomers.

“It’s been a pretty good in the room. You know, everyone respects each other like they should,” rookie forward Trae Wilke explained. “It’s good because we’ve got a great group of guys in there and it’s just a winning culture.”

There is an added pressure for any veteran player on a rookie-laden team, but the Blazers leadership group has done a solid job to nurture a winning culture and environment, something that starts with their captain, Hudson Malinoski.

“There was no question as we were looking around our leadership group who (the captain) was going to be,” Scissons said. “Hudson is well liked around the room and because he’s always the hardest working player on the ice, it allows him to speak up in the room.

“It’s important for us because you need that focal point, you need that lead dog that’s pulling everyone together in the right direction.”

“We’ve got four or five great leaders in the room and they all wear letters, and they all deserve them,” echoed Wilke. “So, all of us (2006 born players) just look up to them to win games and come out on top in tough battles.”

“I was a young guy on the team last year and all of the old guys were good to me,” Malinoski said. “So, it was nice to come into this team, be an older guy and kind of lead the team to success.”

As his team continues to build and grow on their recent successes Malinoski’s message remains the same, and will throughout the course of the season.

“Confidence plays a big role and once you’ve got that confidence you’re a way different player on the ice and it helps you a lot,” he said.