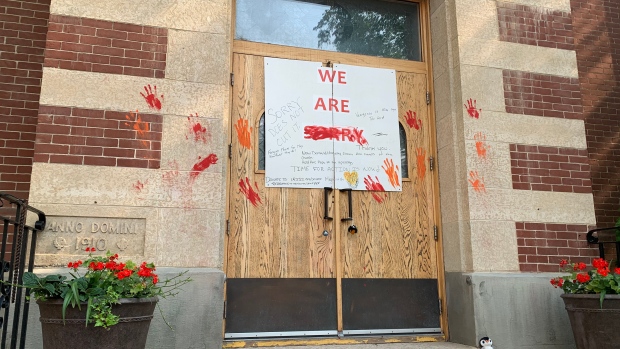 In March of last year, the diocese committed to reviewing these types of files as part of its “safeguarding action plan.”

An independent review committee has only looked at concluded cases.

A case is concluded when “all available investigative avenues have been pursued,” according to the diocese. It may involve criminal charges, internal discipline or a file being concluded due to insufficient evidence.

According to the diocese, there are ten known victims in these cases — including a boy under the age of 13.

The nine files range from a parish employee allegedly accessing pornography in church, to the William Hodgson Marshall case.

In a video posted to YouTube, Saskatoon Bishop Mark Hagemoen apologized for the cases and the church’s role in residential schools.

“I again express my profound sorrow and I apologize for what you have suffered, and for the betrayal, violation, and abandonment you have experienced,” Hagemoen said.

Outside St. Paul Co-Cathedral downtown Saskatoon, a sign was posted on the doors saying, “We are sorry.”

Red paint was put over the word “sorry” and the sign was defaced with messages saying, “Sorry doesn’t cut it.”

“I recognize that both individual and institutional change must happen in our Church to move forward. Words must be accompanied by substantial actions, and trust must be earned, not merely granted,” Hagemoen said in the video.

The diocese declined a request for an interview from CTV News.