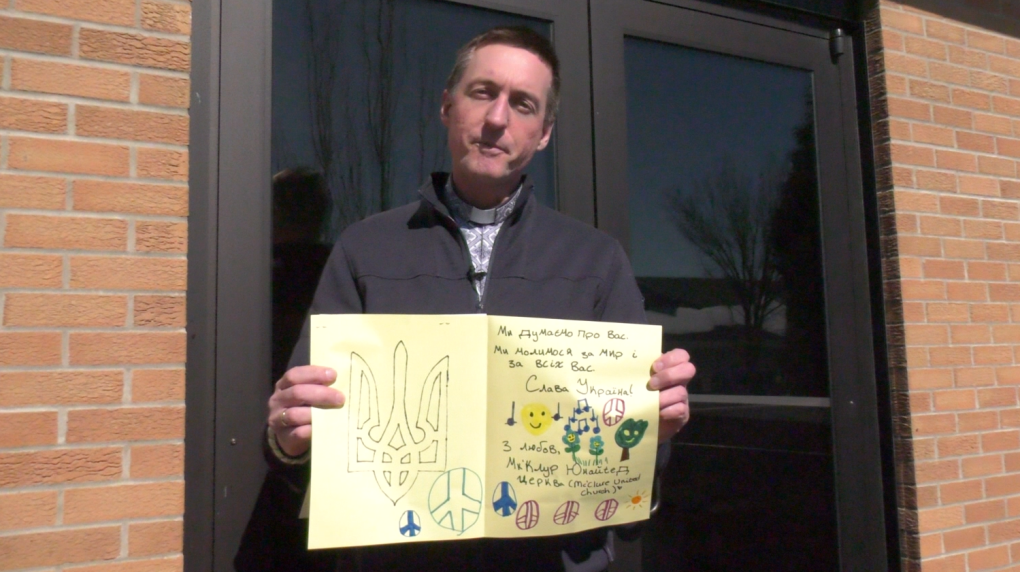 Father Andre Lalach says that since Russia invaded Ukraine, he has received cards, notes, emails and phone calls from random people reaching out to his Ukrainian church.

Children from McClure United Church made a card expressing concern for the people of Ukraine, he said.

“You get these things in the mail and they’re heartfelt and it just speaks to the concerns all sorts of people have. Children, men, women, Christian, non-Christian,” said Lalach, the priest at Dormition Ukrainian Catholic Church.

“At our parish annual meeting, one of our parishioners presented a cheque for $15,000 from someone from the wider community who is not Ukrainian Catholic who wanted to support our effort,” Lalach said.

That money will go to help displaced Ukrainians who will be coming to Saskatchewan in the coming weeks and months.

This is not the first time this church has helped those fleeing war.

“We helped to co-sponsor several refuges years ago from Syria so we’ve learned from that,” Lalach said.

Fr Janko Kolosnjaji of St. Joseph Cathedral mobilized a group through the Ukrainian Catholic Eparchy shortly after the invasion started, assembling volunteers and creating connections for people to donate.

After their first meeting, he says 22 people walked up to the parish office wanting to help.

“They were from different nationalities, different religions. That is very important that we now are united together for one cause,” Kolosnjaji said.

Kolosnjaji feels for those fleeing Ukraine because he had to escape Yugoslavia with his wife and children in 1992 because of war — making this invasion tough to take.

“Now after 30 years what is happening with independence? That is a big, big problem,” he says.

Both Ukrainian Orthodox and Catholic church groups are working for the effort in various ways as well as the Ukrainian Canadian Congress.

At Dormition parish, their immediate work involves creating a database of donations. They are asking donors to make an inventory of items they have for refugees such as clothing or housewares, and once Ukrainians start to arrive they’ll reach out and allocate based on need.