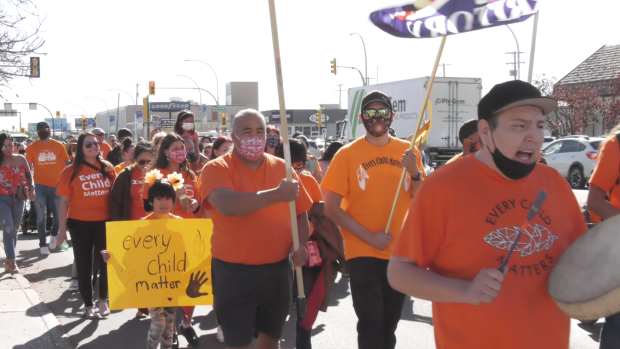 SASKATOON —
On the countries first National Truth and Reconciliation Day on Thursday, the Saskatoon Indian & Metis Friendship Centre is reflecting on the important day.

“More than pleased, it was awesome to see that many people engaged throughout the day,” said Tanya Beauchamp, acting interim director of the Saskatoon Indian & Metis Friendship Centre.

The centre hosted an Every Child Matters Commemoration throughout the whole day. It featured a pancake breakfast, storytellers, face painting and traditional drummers. It also hosted a Walk of Remembrance.

“At the end of the day, we estimated that there were anywhere from 300 to 400 people that took part on our walk.”

One of the people participating in the Walk of Remembrance was residential school survivor Arnold Naytowhow. He walked with two other people who were part of his dorm at the Prince Albert Residential School.

He attended the Prince Albert Residential School from 1970 to 1973, which five others of his siblings attended. His father also attended residential school.

“The truth is out there now and people can be more aware of the news and what happened.”

The centre was one of a few places that hosted events through the day. Wanuskewin Heritage Park also hosted events to help people learn about its history and the lasting impact of residential schools. The SaskTel Centre partnered with the Saskatoon Tribal Council to host it’s “Every Child Matters Concert.”

Beauchamp says many of the people she interacted with came down to the centre to learn and educate themselves more.

“They were asking questions to the survivors and to the elders,” said Beauchamp “We had people from all walks of life come.”

The centre also had a pop up vaccine clinic on site, giving out 300 COVID-19 vaccinations.

The success of the event has Beauchamp thinking about next year’s National Truth and Reconciliation Day and how it can grow and keep the discussion going around truth and reconciliation.

“I would like it to be recognized as a national holiday all across Canada, in every single province but also I would like the opportunity to be able to continue to spread this knowledge.”

“We want this to see this continue, and so it gets bigger and then people can be more aware,” said Naytowhow.

Meals vans face off in Saskatoon this weekend