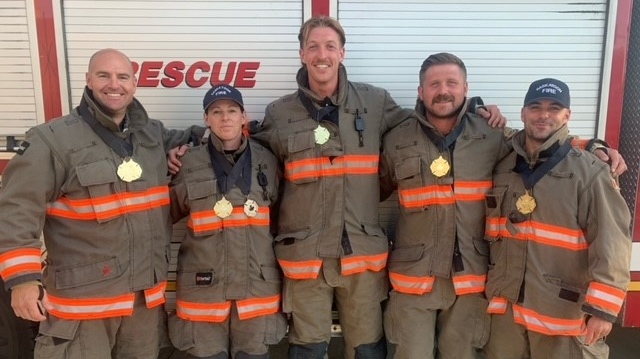 A team of Saskatoon firefighters won gold at the FireFit competition in Regina.

The group has been invited to compete in the national competition in Calgary.

Seward also took silver in the women’s competition, and Wiggins placed first in the men’s over 45 solo event.

“We weren’t really expecting much,” she said. “We didn’t go there expecting to win anything, and we were honestly super shocked when we got gold.”

The team competition is a relay where competitors have to wear full firefighting gear, including a breathing apparatus, according to the FireFit Championships website.

Once the gear is on, competitors are timed as they complete a stair climb, carrying 42 pounds of hose on their shoulder, up six floors with 60 stairs each.

The other portions of the race involve a hose hoist, a forcible entry using a mallet and a simulated firefighting challenge, complete with a run around fire hydrants, powering up hoses and hitting a target with a water stream.

There is also a victim rescue portion of the competition.

“There’s guys out there that like have broken world records and they can do it in like a minute and 18 seconds,” Seward said. “It’s pretty incredible, how fast they can go.”

She said they started training in February with high intensity workouts.

“When we were getting close to the event we started going to Eighth Hall, we started setting up the course there. We have a lot of the equipment for the actual event but we don’t have everything,” she said.

“We just made do with what we had. The closer and closer we got to the event, the more likely we were trying to set up the course and get as much reps as possible.”

She said that not everyone was going to be able to attend the national competition.

“A few of the guys won’t be able to attend it because they’re going on trips and everything else,” she told CTV News.

However, she and Wiggins plan to compete in Calgary between Sept. 7 and 11.

September is Milk Month on the Saskatoon Meals Financial institution