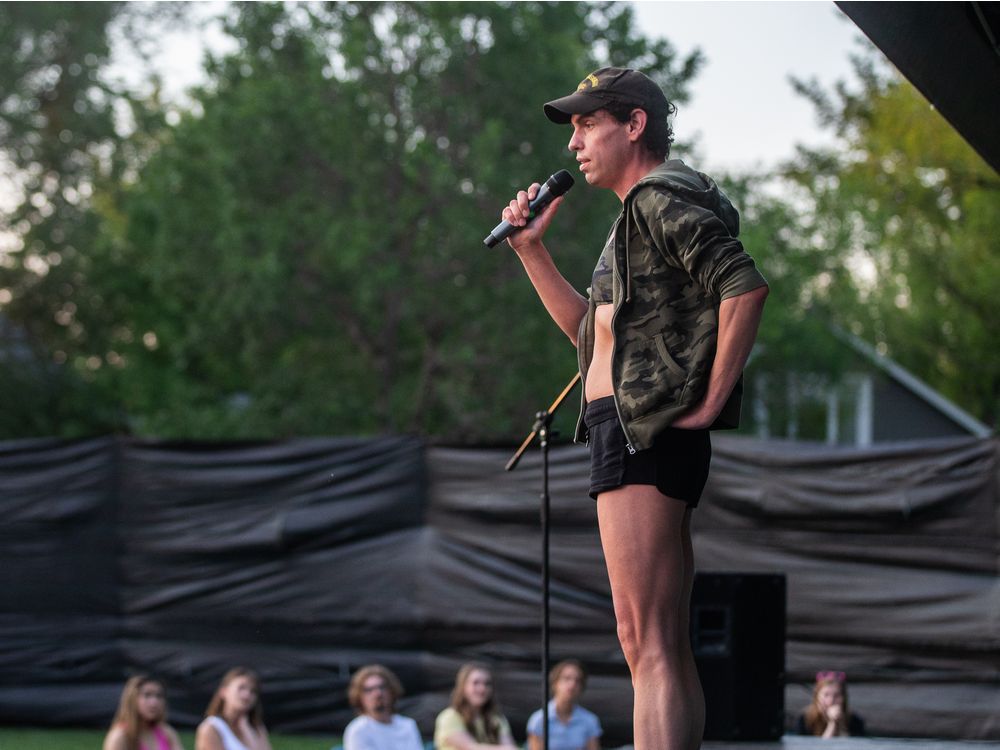 The StarPhoenix will be reviewing all 14 in-person shows featured at this year’s Saskatoon Fringe Festival, which runs July 29 to August 7.

Reviews and recommendations are unbiased and products are independently selected. Postmedia may earn an affiliate commission from purchases made through links on this page.

Saskatoon comics joined forces Saturday for a sold-out show at the Saskatoon Fringe that showed the best — and worst — that standup performance can be.

The Funny Bone Schmomedy zone put out seven performers who ranged from knockouts to total flops for an audience that seemed genuinely delighted to be able to see live comedy for the first time in 18 months. Organizer and host Shawn Cuthand started the matinee show off strong with a practised, punchy set that brought a sleepy daytime audience into the proverbial ‘schmomedy zone.’

Then he was followed by a relatively untested 21-year-old whose jokes about his fraught relationship with his father registered less as comedy and more as a cry for help.

Sometimes you have a rough set. It was a reminder that standup can be good, bad and ugly, sometimes all at once. Ryan Moccasin, the editor of satire news site the Feather, was a standout performer whose riffs on race relations made the audience uncomfortable and hysterical in the span of a few minutes.

And every performer, refreshingly, was happy to try something different. Jillian Smith — a fellow StarPhoenix reporter and the sole female performer — leaned more on storytelling, winding up for a big punch line at the end. And co-organizer Danny Knight ended strong with a set that flexed his stage presence and ability to work a crowd.

The show never had audience members clutching their sides, but every performer managed to draw more than their fair share of laughs from the little matinee crowd in the Refinery.

If you don’t mind the odd bits and are down for a much-needed laugh, this might be the show for you.

No preparation, no problem.

What comedians will spend countless hours on by honing carefully crafted jokes, Anikka Millions does almost on a whim.

There’s a certain endearing punk energy in the fact that Millions had about a week’s notice to write an hour-long standup set. The result isn’t polished — a tongue-in-cheek Millions points out “gibberish” is in the title — but it is compelling in its own way.

Millions worked full-time, six days a week while writing the script — which, on its own merit, is impressive.

It’s a self-admitted work in progress, and it’s unclear how much of the set is actually pre-written and how much is ad libbed.

For a standup set, the jokes are few and far between. Millions, who has relatively little stage experience, flubs lines and delivery and will often establish a topic only to lose track and forget about it a few moments later. Saturday night’s performance was obstinately about sex and pornography, but it often found itself in winding digressions on everything from Star Trek to COVID-19.

It somehow works despite that. Millions, who is a trans woman, finds a moving soul for the show by pulling attention to its early stages of development and drawing a line from that to her own story of refusing to hide her own identity.

It’s a show about coming out of hiding, and its weaknesses come across more as honest strengths. There’s probably a more polished version of it tucked away somewhere, but for now audiences will find something rougher and more genuine in a comedian’s first steps.

The Ballerina & The Grump is featured at the Saskatoon Fringe Festival which runs July 29 through August 7, 2021. Photo taken in Saskatoon, SK on Wednesday, July 28, 2021. Photo by Matt Smith /Saskatoon StarPhoenix

The Ballerina and the Grump

The latest from Saskatoon’s Shadow Players includes elements you might expect for a production aimed at children: A dragon, butterflies, a mouse and a girl determined to pursue her dreams.

The Ballerina and the Grump, the only children’s show at this year’s Saskatoon Fringe, tells the story of Anne Marie, who longs to pursue a career as a ballerina, despite her mother’s more conventional plans.

Anne Marie’s story is told by her friends Bella and Evie with two young women portraying every character in the play.

The two players use minimal costuming and frequent changes to tell the story of the pursuit of a young girl’s dream and a grumpy dragon who opens the show by snarling at the audience: “Get off my lawn!”

It’s tough to determine what age group the show is aimed at, given the near constant dialogue that will prove difficult for really young kids to follow, especially with all of the ambient noise at the outdoor stage.

And the nonstop costume and character changes in the 40-minute play will strain even an adult’s ability to follow.

The story is built around an admirable theme of encouraging girls to pursue their dreams, but there’s so much talk about why Anne Marie shouldn’t pursue ballet, that’s likely to resonate, too.

“If you want a life of poverty, go into the arts,” one player says.

Intertwined with the story about Anne Marie is a more fanciful tale of a dragon, a mouse and butterflies. The grumpy dragon presumably represents the forces that stand in the way of young girls’ dreams.

“This isn’t a Disney movie,” one player says when discussing how to end the play.

But this marks Shadow Players’ 17th year of producing Fringe plays, so it seems reasonable to expect a better grasp of how to entertain kids.

Tomatoes Tried to Kill Me But Banjos Saved My Life is featured at the Saskatoon Fringe Festival which runs July 29 through Aug. 7, 2021. Photo taken in Saskatoon, SK on Wednesday, July 28, 2021. Photo by Matt Smith /Saskatoon StarPhoenix

Tomatoes Tried to Kill Me But Banjos Saved My Life

Keith Alessi jokes in his one-man show that he’s pretty sure he’s the only certified public accountant performing at the Saskatoon Fringe.

He’s also likely the only corporate CEO who abandoned that trajectory to pursue banjo and perform a show based on his life.

The American-Canadian dual citizen tells his story with confidence and wit, punctuated by bouts of banjo playing. As the show’s title suggests, he used his goal to master the “most frustrating of the string instruments” to help recover from cancer and to assist him in reassessing his life.

It sounds heavy, but Alessi never becomes maudlin. If you want an inspiring story told with near-flawless delivery — and that seems just the ticket at this point in the COVID-19 pandemic — here’s the show for you.

Alessi possesses a terrific grasp of timing in as simple a show as you’ll find: Just a man on stage with some chairs, two banjos, a banjitar and a basket of red tomatoes. The lighting enhances the story.

Alessi told a half-capacity crowd at the Broadway Theatre on Saturday about his childhood in Windsor, Ont. as the child of Italian immigrants.

He describes a father filled with rage and a disturbed mother. Growing up in what he calls a “house of horrors,” Alessi learned to block out negativity. That ability infuses his show and prevents it from becoming as dark as some of the material.

His story takes him from the front page of the Wall Street Journal as a CEO to Edmonton, where he ran a coal company, to the Blue Ridge Mountains of Virginia.

As for whether tomatoes really tried to kill him, he’s the best one to explain that.

The StarPhoenix will be reviewing all 14 in-person shows featured at this year’s Saskatoon Fringe Festival, which runs July 29 to Aug. 7. For more reviews, go to thestarphoenix.com.