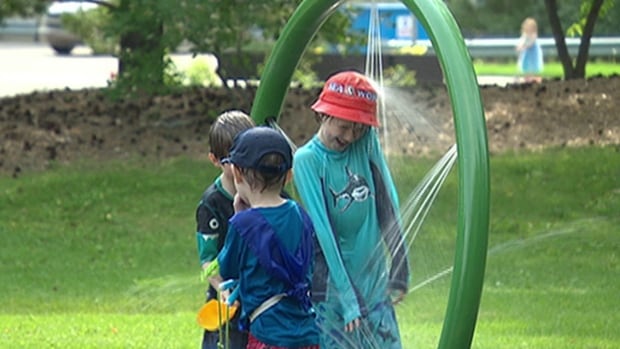 Record temperatures have been hitting Saskatchewan for days but it’s especially hard for those who don’t have a cool place to go to.

Environment Canada says the extreme heat wave that has blanketed the province will continue for another day Saturday, with temperatures in the 30s across most of Saskatchewan before a cooling begins Sunday.

Andréa Ledding, the communications manager with the Saskatoon Housing Initiative Partnership (SHIP), works with some of the most vulnerable people in the city. She’s seen first-hand how the heat wave is affecting them.

Ledding says it is important for other citizens to put themselves in the shoes of vulnerable people and show compassion.

“It could be any of us in that situation. There’s people fleeing domestic violence with small children,” she said.

To help, the City of Saskatoon has created a policy that city buses will provide free transport to citizens during the extreme heat if they do not have bus fare.

SHIP is also working in collaboration with the city on its response to the extreme heat.

The city’s Emergency Management Organization has initiated its heat response strategy to offer help, including for those experiencing housing insecurity.

Created by community partners in the city’s cold weather strategy, the heat response includes designated cool-down locations throughout the city, which offer refuge from the heat. Front-line workers from participating organizations will offer bottled water to those who need it.

Even with measures like these in place, outgoing SHIP executive director Lyn Brown says it is still important to be on the lookout for people who might need help during the heat wave.

“We need to be good neighbours to one another,” Brown said.

“If people can offer bottled water, we are asking them to step up and do so. Saskatoon shines, and when the sun does too to the extent it endangers lives, we need to count on each other to keep everyone safe, cool, and hydrated.”

Many of the organizations that usually open cooling centres are either closed for the weekend due to the Canada Day holiday or at capacity.

Ledding says that nonprofit organizations in the city are working to fill in the systemic cracks created by policy and structure, and she implores everyone else to do the same.

“Pay attention to your neighbours, whoever they are,” she said.

“Whether you’re a business or you’re an individual, if you see someone in distress, ask them if they’re OK. Have bottled water on you [to share] if you can.”

Saskatchewan Weekend11:04The challenges of being homeless in extreme heat

Andréa Ledding works with the Saskatoon Housing Initiative Partnership, or SHIP. They help homeless people and this week has created problems because of the extreme heat combined with a statutory holiday. She joins host Shauna Powers to reflect on the challenges homeless people are facing in this ongoing heatwave. 11:04

‘Should you might help it’s best to’: Arborist elevating donations for Saskatoon Meals Financial institution