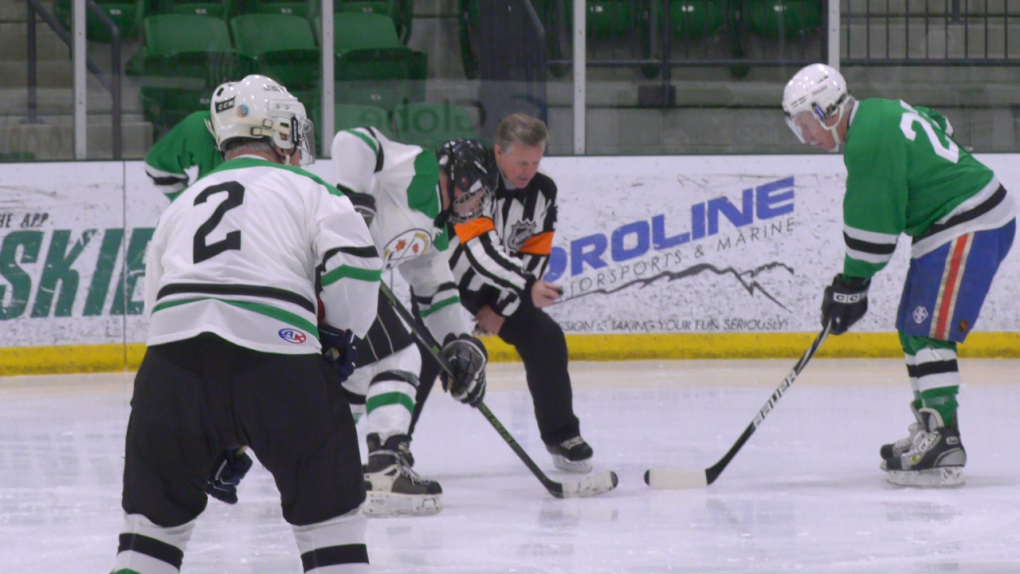 A group of 22 hockey players in Saskatoon were given a distinct honour as new members of the 80-plus Hockey Hall of Fame.

“You don’t have to be good, you just got to be old,” inductee Ray Sladek said Saturday prior to the annual game.

The ceremony inducted 18 members of Saskatoon’s 60-plus hockey league as part of its class of 2022.

The daycare for old men — as some of the wives have come to call it, gets these old timers together twice a week to keep playing the game they learned on frozen sloughs and dugouts as children.

“It keeps the heart rate down and your blood pressure down. You get the aspect of the physical exercise, then there’s the companionship with the guys. And there’s still some competitiveness left in us old guys,” Sladek said.

The league started with three players mulling over creating a league for older players in 1993. Now there are 144 players spread across 12 teams.

Fellow inductee Don Reimer remembers honing in his game as a child on a frozen pond in his backyard formed by his mom throwing slop water and potato peelings on the then outskirts of Saskatoon near Idylwyld Drive.

“Then I graduated to the sloughs around the airport. You had to skate around the cattails and the weeds, so that gave me good training for doing turns,” Reimer said.

Reimer remembers being asked to join his first old timer league when he was 35 years old. Back then he didn’t know how long he’d be able to play hockey. First starting with a five-year plan, the 81-year-old Reimer has now whittled his hockey future down to a two-year plan.

“Right now I think I’m playing quite well. I feel like I’m skating fast. Although if I saw myself on video I’d wonder who is that slow bugger out there,” Reimer said with a smile.

After more than six decades of playing organized hockey, Sladek said there is one hockey lesson above the rest that’s guided him all these years.

“It’s a team sport. You got to be a team player. You can’t win a hockey game by yourself. That’s what you have to do: play as a team,” Sladek said.

While Reimer and Sladek appreciate the game, they also hate going to the gym, and they love spending time in the dressing room.

With multiple generations of friends and family cheering them on, these distinguished Canadian 80-plus Hockey Hall of Fame members capped off the day with a well deserved banquet at Western Development Museum with roughly 500 people in attendance.