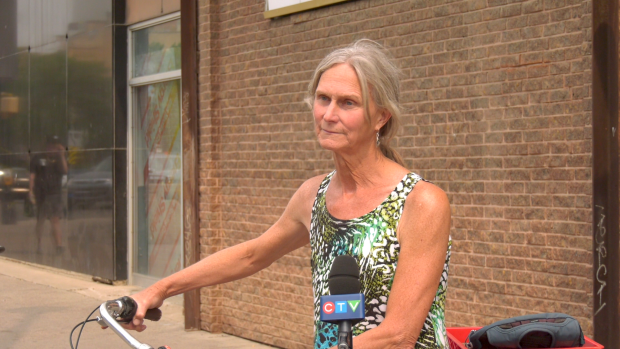 SASKATOON —
A Saskatoon woman says she was hurt while being handcuffed by two alternative response officers (ARO) for riding her bike on the sidewalk on July 15.

Miki Mappin says she was riding her bike along 20th Street and Second Avenue when she saw two AROs, stopped and continued to walk her bike.

Cycling on sidewalks in Saskatoon is not permitted under Bylaw No. 9705.

Mappin says the AROs stepped in front of her bike to discuss the bylaw, which she said she disagreed with, and when she began to walk away, they arrested her.

“I was quite surprised at that point, I didn’t expect that,” Mappin told CTV News.

“I turned away and before I knew it, I was hit from behind and I remember hearing my bike clattering on the ground under me and me falling on top of the bike.

“And then I was sort of lifted through the air and pushed against the wall of the building with my arms twisted behind my back.”

The AROs questioned if she had an address and she was given a $50 ticket for riding on the sidewalk, according to Mappin.

Mappin says she was left with a bleeding gash on her leg and marks on her wrists from the handcuffs.

“I don’t think there was any reason why they would think I was dangerous enough they have to immobilize me in that moment,” Mappin said.

Mappin says she has been a member of Saskatoon Police Service Committee on Diversity (SPACOD) for six years and was surprised at the encounter as she’s always had a friendly relationship with police.

She filed a report with the Public Complaints Commission (PCC) and hopes it will give police “tools to deal with the situation.”

“What I want them to do is to stand down those ARO officers right now because something has seriously gone wrong with their training,” Mappin said.

In an email response to CTV News, Saskatoon Police Service confirmed an arrest was made and that officer reports and video surveillance of the incident do not indicate an escalated use of force.

AROs operate within the same standards for reporting as police officers, SPS said.

Police added the matter will be reviewed by the PCC and they are awaiting the outcome of the investigation.

How (not) to benefit from the Saskatoon Ex after its return