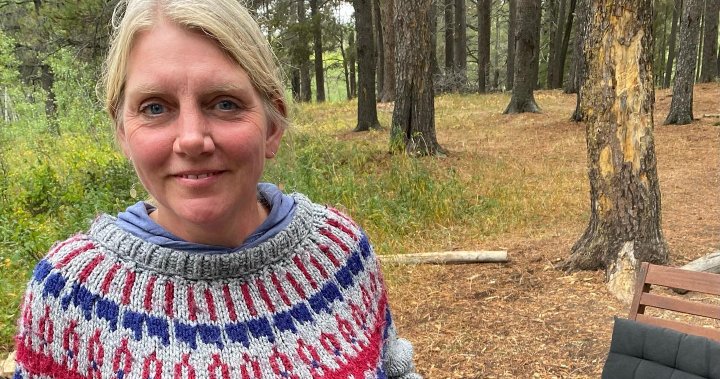 Lara Guerrero from Saskatoon was at a hotel in Regina last week, showing family visiting from Germany around the province. That visit now has her seeking help to recover a treasured item.

When she approached her vehicle Friday morning, she noticed her car had been broken into and her belongings were missing.

But none of her long list of stolen items truly mattered, except for her treasured sweater.

“My grandma gave it to me for Christmas in 1990. She casually asked me my favourite colours and then knit me a sweater using those very colours,” she wrote on her Facebook post.

Victoria police say they have your lost samurai sword

Knitting that sweater came with a lot of perseverance and determination.

“She had rheumatoid arthritis, so her hands were very kind of gnarled. So anything that she ever made took a lot of effort,” she told Global News.

Guerrero said the sweater has been a staple in her life.

“I’ve been wearing it for 32 years. It’s been with me to Mexico, on every camping trip, tree planting. And people actually know – they know me with it and know it as the sweater. So it’s well known,” she said.

Guerrero says the theft of her belongings is an indication of a larger issue in the city. She believes the culprit was someone who may be homeless.

“I’m not upset so much that my car was broken into because the person that broke in clearly needed it. Bedding and warm clothes and shoes and food. They actually stole our milk from our cooler,” she said.

She took to social media to share the devastating news.

The warm response from those who commented is putting her at ease.

“I appreciate that people have actually offered to knit me a sweater. But, it’s the sweater – it’s my grandma’s sweater.”

Guerrero hopes someone will recognize the sweater, and will try their best to return it to its rightful owner.

2:01
Saskatoon home renovations lead to the discovery of a lost family treasure