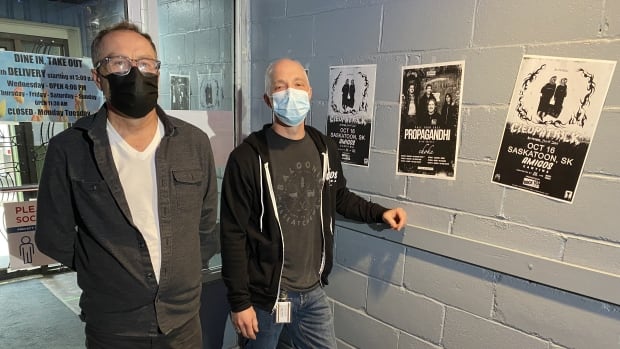 When Megan Nash steps on stage at Amigos Cantina this fall, the Saskatchewan artist expects her shoulders to relax and her pandemic-triggered anxieties to ease.

That’s because everyone — from staff to fans — at the Saskatoon concert venue will be required to be fully vaccinated against COVID-19.

Amigos announced on social media Tuesday that it will be requiring proof of vaccination for its upcoming fall shows.

Jim Clarke, the Saskatoon restaurant and concert venue’s owner, said attendees will be asked for a printed copy or screen shot of their immunization record, or the card they received upon receiving their COVID-19 jabs, when their tickets are checked at the door.

Up to 48 hours before the show, refunds will be given to those who are unvaccinated and unable to attend, he added.

“We certainly don’t want to be linked to a spread of any kind, so we’re just doing our part,” Clarke said. “Unfortunately, it seems it’s the people who are unvaccinated who are being infected the most, so we want to keep everyone safe the best we can.”

Megan Nash called Amigos’s live event vaccine mandate ‘an act of kindness and respect’ to artists. The Saskatchewan singer-songwriter is set to play a show at the Saskatoon venue this fall. (Ali Lauren Creative Services)

Clarke noted the decision to mandate vaccines at Amigos was sparked by conversations they had with artists as they booked shows for the upcoming year.

Nash said most musicians are grateful for those kinds of chats beforehand.

“People in the industry want to keep other people safe. No one wants to be sending out COVID alerts after an event,” Nash said. “As an artist, I would feel awful if someone got sick at one of my shows.”

‘The way of the immediate future’

Clarke noted the COVID-19 restrictions on the restaurant side of Amigos will remain the same, but with more people and less room to physically distance during a concert, he said a live event vaccine mandate is “the way of the immediate future.”

According to Brant Palko, the promoter who books the bar’s live entertainment, vaccine mandates are shaping up to be an industry standard.

“Most artists and booking agents recognize that, if we want to have a return to live music, this is just the way it’s going to have to be,” he said, noting almost every artist he’s recently booked has asked about Amigos’ vaccination policy.

Jim Bence, the president and CEO of Hospitality Saskatchewan, agreed. He added that vaccine mandates at restaurants, bars and concert venues are “really picking up steam” in the province.

“I think people are really getting frustrated, and they are really wanting to do what they can to keep themselves and their community safe,” he said. “There are folks out there who are hesitant or, for whatever reason, reluctant — or just unwilling, period — to get vaccinated, and that really sets us on a different trajectory.”

Bence predicted most businesses across Saskatchewan will look to other jurisdictions in the U.S. and other parts of Canada before eventually following suit in the coming weeks.

‘Get vaccinated or forego some privileges,’ says doctor

“Throughout this pandemic, we’ve all had to make sacrifices,” he said. “Now that we’re nearing the end, the delta variant is so infectious that I think it’s time for people who are unvaccinated to either step up and get vaccinated or forego some privileges.”

“I think that any agency that has the capacity to require vaccinations ought to do it,” he advised. “We are in a pandemic and the earlier that you institute protective measures, the less harm occurs and the more lives you save.”

Gardening: How you can take care of lily leaf beetles in Saskatoon