Arizona Lagimodiere received a life sentence with no chance of parole for 16 years, while Trystin Spyglass got 17 years for manslaughter. 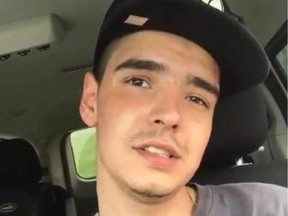 Tristen Roy, 21, was killed in a random drive-by shooting in 2020 (Supplied photo) jpg

Tristen Roy did not have an easy life, but he was a beacon of light for people who needed him.

He loved family gatherings, fishing trips, hockey, swimming and skateboarding. But above all else, Roy loved his two young sons. He lit up every time he talked about them.

“Tristen was the kind of kid who wanted everyone around him to be happy,” Roy’s biological father, Justin Eva, said.

Reading his victim impact statement in a Saskatoon King’s Bench courtroom, Eva said he will never understand why his son, just shy of his 22nd birthday, was killed in a drive-by shooting while standing in front of 320 Avenue U South just after midnight on July 29, 2020.

“Mr. Roy’s children are going to have a very hard life because of what theses offenders did,” Justice Brian Scherman said when responding to the role of intergenerational trauma in the lives of Arizona Sky Lagimodiere and Trystin Spyglass.

Court heard the men randomly targeted Roy because he was wearing a black shirt — the Terror Squad’s gang colours — as they drove around Saskatoon, seeking revenge for a shooting that killed one of their Westside Outlaw gang members a month earlier.

Instead, Lagimodiere fired 10 shots out the driver’s side window at an innocent bystander with no gang affiliation after Spyglass passed him a sawed-off .22 calibre rifle, Crown prosecutor Carla Dewar said during Tuesday’s sentencing hearing.

Roy died after being hit once behind the ear.

“Mr. Roy was shot because he was wearing a particular colour. That is what we have come to, unfortunately,” Dewar said.

“(Gang members) need to realize that an evening of absolute stupidity can result in a life sentence, (and) that those involved in the gang life will end up either in jail, dead in jail or injured or dead on the street.”

Spyglass, 24, and Lagimodiere, 26, were charged with first-degree murder, but Dewar said the Crown agreed to a plea deal, mostly to spare a trial where the credibility of their main witness — a woman who was in the back seat of the shooter’s car — would have been challenged due to her extreme intoxication that night.

Court heard the men were using meth, cocaine and alcohol that night.

Little, representing Lagimodiere, said her client spent much of his childhood in foster care, desperately seeking a relationship with his mother and father, who have both since died.

He has three children. One of them is now in the same foster system Lagimodiere grew up in, Little told court.

She said it’s something seen all too often in the justice system: young Indigenous men who reach out to gangs because they are alone and searching for connection.

“This is lateral violence. You are hurting your own people. You are doing the work of the colonizer, only it’s your hands that are bloody now,” Roy’s close family friend, Jenna Therens, said in her victim impact statement.

“Gladue factors are not an excuse. They are a contextual analysis because the Supreme Court of Canada, and other courts, has said that sentencing is an individualized process,” Nolin, who represented Spyglass, said.

Both men are longtime gang members and drug dealers, but their prior criminal records are not as violent as one might expect, court heard. Nolin pointed out that their likelihood of reoffending is high, but not necessarily reoffending violently.

Scherman said he’s skeptical about the likelihood of rehabilitation, given their background, and that the sentence should focus on denunciation and deterrence.

“This kind of vigilante nature of justice is not a system under which our society can operate, because going down that road just leads to a continuation of spite,” he said when accepting the joint submission.

Therens told Roy’s killers in her statement that it’s now their responsibility to honour Roy by being a beacon of light — urging them to get an education in prison and learn to stop hurting themselves and others.

It’s what Roy would have wanted for them, she added.